Explores new perspectives on social media entertainment
There is a new class of cultural producers-YouTube vloggers, Twitch gameplayers, Instagram influencers, TikTokers, Chinese wanghong, and others-who are part of a rapidly emerging and highly disruptive industry of monetized "user-generated" content. As this new wave of native social media entrepreneurs emerge, so do new formations of culture and the ways they are studied.
In this volume, contributors draw on scholarship in media and communication studies, science and technology studies, and social media, Internet, and platform studies, in order to define this new field of study and the emergence of creator culture. Creator Culture introduces readers to new paradigms of social media entertainment from critical perspectives, demonstrating both relations to and differentiations from the well-established media forms and institutions traditionally within the scope of media studies.
This volume does not seek to impose a uniform perspective; rather, the goal is to stimulate in-depth, globally-focused engagement with this burgeoning industry and establish a dynamic research agenda for scholars, teachers, and students, as well as creators and professionals across the media, communication, creative, and social media industries.
Contributors include: Jean Burgess, Zoe Glatt, Sarah Banet-Weiser, Brent Luvaas, Carlos A. Scolari, Damian Fraticelli, Jose M. Tomasena, Junyi Lv, Hector Postigo, Brooke Erin Duffy, Megan Sawey, Jarrod Walzcer, Sangeet Kumar, Sriram Mohan, Aswin Punathambekar, Mohamed El Marzouki, Elaine Jing Zhao, Arturo Arriagada, Jeremy Shtern, Stephanie Hill 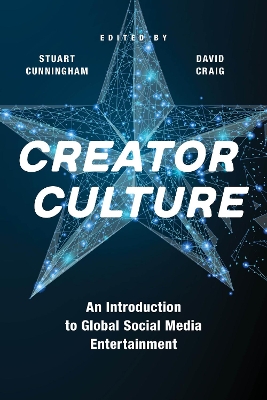 » Have you read this book? We'd like to know what you think about it - write a review about Creator Culture: An Introduction to Global Social Media Entertainment book by Stuart Cunningham and you'll earn 50c in Boomerang Bucks loyalty dollars (you must be a Boomerang Books Account Holder - it's free to sign up and there are great benefits!)


A Preview for this title is currently not available.
More Books By Stuart Cunningham
View All

In the Vernacular: A Generation of Australian Culture and Controversy
$36.00 $45.00

A Treatise on the Law of Executors and Administrators: And of the Administration of the Estates of Deceased Persons, with an Appendix of Statutes and Forms.
$65.57 $72.86