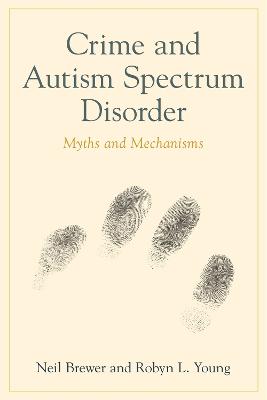 Having Autism Spectrum Disorder (ASD) can - given certain situational conditions - make individuals more vulnerable to becoming caught up in criminal activity and vulnerable to unfavourable interactions once in the criminal justice system.

Guided by empirical research, psychological theory and illustrative case studies involving adults with ASD who have been implicated in crimes, Robyn L. Young and Neil Brewer explain why. They examine the pivotal cognitive, social and behavioural characteristics unique to ASD (such as weak Theory of Mind, restricted interests and acute sensory sensitivities) that - individually or in interaction - may contribute to individuals becoming involved in illegal activities. They then discuss how these same characteristics can result in ongoing ineffective interaction with the criminal justice system. Arguing that the forensic assessment of individuals with ASD requires substantial redevelopment to clarify the key deficits contributing to criminal behaviour, the authors highlight the need for, and desirable nature of, intervention programs to minimize the criminal vulnerability of adults with ASD and to prepare them for interactions with the criminal justice system. A final section raises some major unanswered questions and issues for future research.

This book will be of immeasurable interest to criminal justice professionals including probation officers, social workers, clinical and forensic psychologists, police officers, lawyers and judges, as well as students of these professions.

» Have you read this book? We'd like to know what you think about it - write a review about Crime and Autism Spectrum Disorder book by Neil Brewer and you'll earn 50c in Boomerang Bucks loyalty dollars (you must be a Boomerang Books Account Holder - it's free to sign up and there are great benefits!)

Robyn L. Young is Associate Professor at the School of Psychology at Flinders University of South Australia. Her early research was concerned with Savant Syndrome, and this led her to begin researching Autism Spectrum Disorder (ASD). Robyn, along with Neil Brewer, developed tools for early assessment (ADEC); she also developed an intervention package (SPECTRA), both of which are published and distributed by the Australian Council for Educational Research (ACER). She has provided numerous training workshops for professional bodies throughout Australia and overseas. More recently, Robyn has been heavily involved with the criminal justice system, providing many medico-legal reports and Fitness to Plead assessments for adults with ASD and appearing regularly as a witness for the court and as an expert witness. Neil Brewer is a Matthew Flinders Distinguished Professor at the School of Psychology at Flinders University of South Australia. He has worked in many areas of applied experimental psychology. During the late 1990s, Neil began to focus his research on the applications of psychology in the criminal justice realm. This research has had a particular emphasis on policing practices, especially with respect to the collection and interpretation of evidence from eyewitnesses to crimes. He has been heavily involved in conducting professional development programs across Australian states for judges and magistrates, police and prosecution and defence lawyers, and his research has been referenced in judgements in the United States and New York Supreme Courts, the United States Courts of Appeal (District of Columbia Circuit), and the Western Australia Court of Appeal. Neil also maintains an active presence in the area of Autism Spectrum Disorder (ASD), collaborating with Robyn L. Young on research in areas such as face recognition and early detection.

A Preview for this title is currently not available.
More Books By Neil Brewer
View All