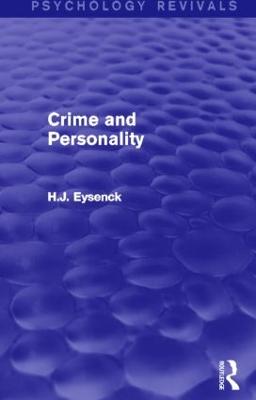 When Crime and Personality was first published in 1964, J.A.C. Brown, writing in the New Statesman, commented: 'There can be no doubt of the importance of Professor Eysenck's book on the nature and treatment of criminal behaviour.' This third edition originally published in 1977 had been completely revised and brought up to date, and although the major theory linking personality and crime has been retained, many of the details have been changed in conformity with recent research of the time.

The book presents a theory concerning the personality of criminals, and offers evidence to show that these personality features characterising criminals are based on genetic foundations. It is argued that criminality as a whole is not exclusively based on environmental factors as has so often been suggested, but has a strong biological basis. A good deal of evidence is reviewed showing that there are many data supporting this view, from studies of identical and fraternal twins, adopted children, and comparisons between criminals and non-criminals both in the Western world and in Communist countries.

Professor Eysenck suggests that important consequences follow from such an attempt to redress the one-sided emphasis on environmental factors which had been so characteristic of the previous fifty years, and some of these consequences are described in detail. He further suggests that only proper understanding of the psychological factors making for antisocial behaviour will help in reversing the increasing burden that criminality places upon society. The book also takes issue with political arguments of the time regarding the origins of criminality, and shows that criminals behind the Iron Curtain show the same personality characteristics as do criminals in Western countries.

Other Editions - Crime and Personality (Psychology Revivals) by H.J. Eysenck 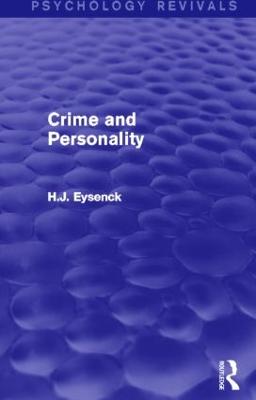 » Have you read this book? We'd like to know what you think about it - write a review about Crime and Personality (Psychology Revivals) book by H.J. Eysenck and you'll earn 50c in Boomerang Bucks loyalty dollars (you must be a Boomerang Books Account Holder - it's free to sign up and there are great benefits!)


A Preview for this title is currently not available.
More Books By H.J. Eysenck
View All