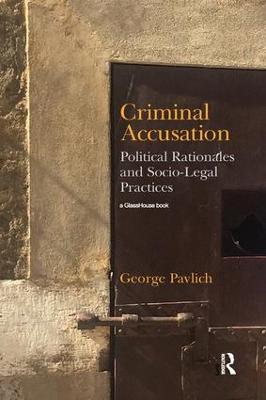 Accusing someone of committing a crime arrests everyday social relations and unfurls processes that decide on who to admit to criminal justice networks. Accusation demarcates specific subjects as the criminally accused, who then face courtroom trials, and possible punishment. It inaugurates a crime's historical journey into being with sanctioned accusers successfully making criminal allegations against accused persons in the presence of authorized juridical agents. Given this decisive role in the production of criminal identities, it is surprising that criminal accusation has received relatively short shrift in sociological, socio-legal and criminological discourses. In this book, George Pavlich redresses this oversight by framing a socio-legal field directed to political rationales and practices of criminal accusation. The focus of its interrogation is the truth-telling powers of an accusatory lore that creates subjects within the confines of socially authorized spaces. And, in this respect, the book has two overarching aims in mind. First, it names and analyses powers of criminal accusation - its history, rationales, rites and effects - as an enduring gateway to criminal justice. Second, the book evaluates the prospects for limiting and/or changing apparatuses of criminal accusation. By understanding their powers, might it be possible to decrease the number who enter criminal justice's gates? This question opens debate on the subject of the book's final section: the prospects for more inclusive accusative grammars that do not, as a reflex, turn to exclusionary visions of crime and vengeful, segregated, corrective or risk-orientated punishment. Highlighting how expansive criminal justice systems are populated by accusatorial powers, and how it might be possible to recalibrate the lore that feeds them, this ground-breaking analysis will be of considerable interest to scholars working in socio-legal research studies, critical criminology, social theory, postcolonial studies and critical legal theory. 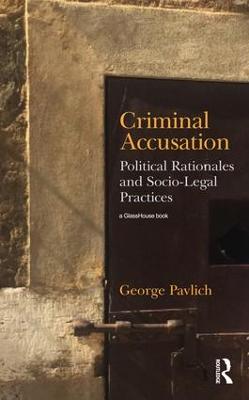 » Have you read this book? We'd like to know what you think about it - write a review about Criminal Accusation: Political Rationales and Socio-Legal Practices book by George Pavlich and you'll earn 50c in Boomerang Bucks loyalty dollars (you must be a Boomerang Books Account Holder - it's free to sign up and there are great benefits!)


A Preview for this title is currently not available.
More Books By George Pavlich
View All