The Politics of Kidnapping Oil Workers

Crude oil extraction in the Niger Delta region of Nigeria generates 96% of all foreign earnings and 85% of state revenues, making it crucial to the survival of the Nigerian state. Several generations of state neglect, corruption and mismanagement have ensured that the Delta region is one of the most socio-economically and politically deprived in the country. By the late 1990s there was a frightening proliferation of armed gangs and insurgent groups. Illegal oil bunkering, pipeline vandalism, disruption of oil production activities, riots, and demonstrations intensified and in 2003, insurgents began kidnapping oil workers at a frenetic pace. In late 2005, an uber-insurgent movement 'organization' was formed in Nigeria. Christened the Movement for the Emancipation of the Niger Delta (MEND), it operates as an amorphous, multifaceted amalgam of insurgent groups with an unprecedented clinical precision in execution of intents. By focussing on kidnappings that are putatively connected to the struggle for emancipating the Niger Delta, Oriola makes the case for analysing MEND as a social movement organization, rather than a terrorist or criminal gang by showing how political processes shape kidnappings in the Delta. The use of violent repertoires of contention has not garnered sufficient attention in the social movement literature, despite the fact that that around the world, many similar groups are adopting violent tactics without necessarily eschewing non-violent techniques. Based on multi-actor research, including interviews and focus group discussions with community members, military authorities, 42 ex-insurgents directly involved in illegal oil bunkering and kidnapping, and official email statements from 'Jomo Gbomo', the spokesperson of MEND, this book will be of interest to sociologists, political scientists and peace and security studies scholars.

Other Editions - Criminal Resistance? by Temitope B. Oriola 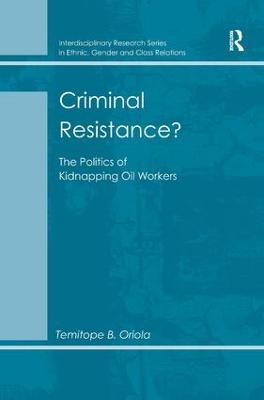 » Have you read this book? We'd like to know what you think about it - write a review about Criminal Resistance? book by Temitope B. Oriola and you'll earn 50c in Boomerang Bucks loyalty dollars (you must be a Boomerang Books Account Holder - it's free to sign up and there are great benefits!)

Temitope Oriola is Assistant Professor of Criminology at the University of Alberta, where he received his PhD in 2011. A recipient of the Governor General of Canada Academic Gold Medal, Oriola was Assistant Professor at the University of Massachusetts, Boston and Banting Postdoctoral Fellow (Irving K. Barber School of Arts and Science, University of British Columbia, Canada) prior to joining the University of Alberta faculty. Oriola's approach to criminology and socio-legal studies focuses on social harmÂ and thus transcends the strictures of the criminal law. His areas of interest include oil-related insurgencies, political kidnapping, use of force by police, ethics of research in conflict zones, and response of Western liberal democratic states to the threat of terrorism. Oriola's works have been published in leading journals, such as Sociology, the British Journal of Criminology, Critical Studies on Terrorism, African Security and Canadian Ethnic Studies, among others.

A Preview for this title is currently not available.
More Books By Temitope B. Oriola
View All