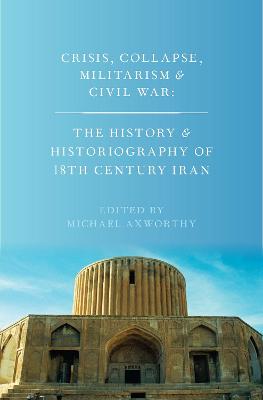 The eighteenth century was a crucial era in modern Iranian history, but up to now it has been little studied outside Iran. In Crisis, Collapse, Militarism and Civil War, Michael Axworthy has gathered leading experts on this period from around the world to provide a multifaceted account of this fascinating, dramatic, and turbulent era. The volume covers economics, intellectual history, military developments, politics, and the visual arts.
In the 1720s, after the collapse of Safavid rule in 1722, it seemed that Iran might disappear altogether, partitioned between her neighbors. Within a few years the country surged back to make a bid for
regional dominance under Nader Shah, but lapsed again into civil war after his untimely death in 1747. The civil wars lasted almost until the end of the century, albeit with an interlude of relative calm and good governance under Karim Khan Zand, who ruled from the mid-1750s until his death in 1779. In 1796, after more civil wars, Agha Mohammad Shah had himself crowned as the first monarch of the Qajar dynasty, which lasted until 1925. This formative period is vital for understanding modern and
contemporary Iran, and it is a fascinating drama of events and personalities in its own right. It was a period of crisis and turmoil, but also a period of possibility and creativity in ways that have
for the most part been forgotten.Until now, scholarship on the significance of the eighteenth century in Iran has been scant and often obscure. This volume will not only change that, but it will also reshape our understanding of the history of one of the most important and influential states in the Middle East.

» Have you read this book? We'd like to know what you think about it - write a review about Crisis, Collapse, Militarism and Civil War: The History and Historiography of 18th Century Iran book by Michael Axworthy and you'll earn 50c in Boomerang Bucks loyalty dollars (you must be a Boomerang Books Account Holder - it's free to sign up and there are great benefits!)


A Preview for this title is currently not available.
More Books By Michael Axworthy
View All

Revolutionary Iran: A History of the Islamic Republic Second Edition
$19.99 $24.99