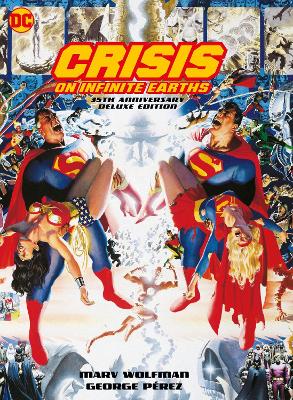 All the greatest DC heroes from across time and space join forces to stop a being more powerful than any they've ever faced--a mysterious being known as the Anti-Monitor who has begun a crusade across time to bring about the end of all existence.

35 YEARS AGO, WORLDS LIVED, WORLDS DIED-- AND COMICS WERE NEVER THE SAME.

As their planets are erased from existence one by one, can the heroes from different Earths band together to stop the destruction of all existence? It's going to take the combined powers of two Supermen, the Flash, a new Superboy, Supergirl, Alexander Luthor, and countless others to fight the madness--and not all will survive.

An unforgettable and defining event in comics history, Crisis on Infinite Earths was the first company-wide crossover to make good on its promise of lasting change. Written by Marv Wolfman and penciled by George Perez, Crisis on Infinite Earths- 35th Anniversary Deluxe Edition collects the entire 12-issue series--with each page painstakingly restored and meticulously recolored--and also includes the creative team's 100-page follow-up, History of the DC Universe, as well as a wealth of additional behind-the-scenes material.

» Have you read this book? We'd like to know what you think about it - write a review about Crisis on Infinite Earths: 35th Anniversary Edition book by Marv Wolfman and you'll earn 50c in Boomerang Bucks loyalty dollars (you must be a Boomerang Books Account Holder - it's free to sign up and there are great benefits!)