Description - The Critic by Peter May

GAILLAC, SOUTH-WEST FRANCE. A bottled-up secret. Gil Petty, America's most celebrated wine critic, is found strung up in a vineyard, dressed in the ceremonial robes of the Order of the Divine Bottle and pickled in wine. A code to crack. For forensic expert Enzo Macleod, the key to this unsolved murder lies in decoding Petty's mysterious reviews - which could make or break a vineyard's reputation. A danger unleashed. Enzo finds that beneath the tranquil fa ade of French viticulture lurks a back-stabbing community riddled with rivalry - and someone who is ready to stop him even if they have to kill again.

Buy The Critic by Peter May from Australia's Online Independent Bookstore, Boomerang Books.

Other Editions - The Critic by Peter May 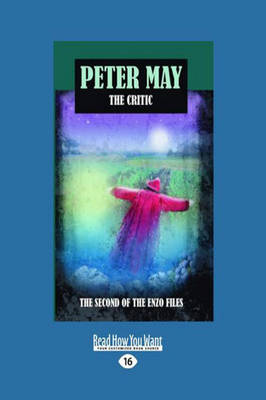 Book Reviews - The Critic by Peter May

» Have you read this book? We'd like to know what you think about it - write a review about Critic book by Peter May and you'll earn 50c in Boomerang Bucks loyalty dollars (you must be a Boomerang Books Account Holder - it's free to sign up and there are great benefits!)

4 stars The Critic is the second book in the Enzo Macleod Investigation series by Scottish journalist, screenwriter and author, Peter May. The prospect of raising funds for his new forensic department at the university where he teaches biology spurs former forensics expert Enzo Macleod to travel to Gaillac to investigate a second case from Roger Raffin’s best-selling book of notorious unsolved murders. But on his very first night there, Enzo almost dies twice and, the second instance, he is certain, was an attempt on his life.

Until his disappearance in 2003, Gil Petty was described as “the most influential wine critic in the world”. A year after he went missing, his body was found by pickers in La Croix Blanche vineyard, posed in the ceremonial garb of an exclusive wine fraternity. He had been pickled in red wine. It is soon apparent that he was unpopular with some winegrowers, and they weren’t the only ones with motive.

It’s quickly clear that Enzo’s investigation is not well received by all the locals. When he visits the young gendarme who investigated Petty’s disappearance and murder, he meets with resistance to the point of obstruction, but when another body is discovered in similar condition, the gendarme unbends enough to allow Enzo to assess the scene. After Enzo is invited by the juge d’instruction to consult on both investigations, the young man’s resentment as Enzo exposes his unwitting incompetence is evident.

The tiny gîte in which Enzo is staying is the former home of an eighteenth-century Petty ancestor, and also where Petty was living when he disappeared. It becomes increasingly cramped as his student and assistant, Nicole Lafeuille arrives with her gear, then Petty’s estranged daughter, Michelle, Enzo’s erstwhile lover, Charlotte Roux, and his daughter Sophie with her boyfriend Bertrand all crowd in.

After they manage to break through the security on Petty’s computer, Enzo decides they need to decode the cipher in which Petty wrote his tasting notes, reasoning this might point to motive as, while a high Petty rating would guarantee success for the vineyard, a low one would spell ruin. The way they go about this is terribly clumsy, but they do all get their fill of good wine.

Enzo’s other avenue of investigation, apart from the source of Petty’s death garb, is to trace the origin of the wine in which the victims were pickled using a wine fingerprint, which necessitates a plane trip to California in a kilt.

The mystery is intriguing enough to keep the pages turning: even if the murderer’s method is obvious by halfway, the motive and the identity are not. There are several red herrings to keep the reader guessing, and multiple attempts on Enzo’s life, at least one of which remains unresolved at the conclusion. That “I’ll just go to the murderer’s place to see if I can find the bodies, but I won’t bother to let anyone know where I’m going” trope is wearing a bit thin, though.

Enzo does seem to be juggling beautiful women in this instalment, shamelessly flirting even as he really has too many women around him, all giving each other black looks. May also demonstrates that the French bureaucracy has the same fondness for acronyms as other nations do. It will be interesting to see where #3, Blacklight Blue takes our transplanted Scot. At times blackly funny and also filled with winemaking facts, this is a page-turner.

Peter May was born and raised in Scotland. He was an award-winning journalist at the age of twenty-one and a published novelist at twenty-six. He is the million-selling author of the Lewis trilogy and the China thrillers; standalone novels including Entry Island, Runaway and Coffin Road; and the Enzo Files - which were first published in the UK by Quercus across 2014 and 2015. The sixth and final instalment in the Enzo series, Cast Iron, will be published in hardcover by riverrun in January 2017.

The Night Gate: the Razor-Sharp Finale to the Enzo Macleod Investigations
$26.39 $32.99