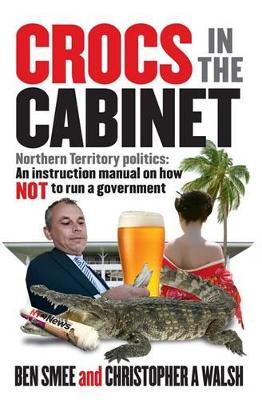 Crocs in the Cabinet

Description - Crocs in the Cabinet by Ben Smee

In the Northern Territory, politics isn't a numbers game, it's a blood sport.The recent goings-on in Top End politics make the Rudd, Gillard, Abbott and Turnbull skirmishes in Canberra look positively civil and Bronwyn Bishop's travel expenses like small change. Not since the night Malcolm Fraser lost his trousers has the Australian political scene provided such entertainment. Laying bare the backstabbing, scandals, power struggles and flawed characters that took the Country Liberal Party from the Northern Territory's dominant political force to near extinction in four short years, CROCS IN THE CABINET may read like a satire, but it is all true. You have to read it to believe it. Find out exactly how bonkers the NT parliament really was, as you read of ...- a drunk Territory minister, a seedy Tokyo 'cabaret' club, a $5000 bar tab and taxpayer-funded credit card. Priceless!- the lewd videos a masturbating minister sent someone, not his wife- the anguished words 'WE ARE IN LOVE!' echoing from the floor of parliament- a Chief Minister defying a coup by throwing his phone in a pool- the 'gone fishing' MP who chose baiting up instead of turning up- the minister, charged with assault, who sold her 'MY HUSBAND IS HAVING AN AFFAIR WITH MY NIECE' story to TAKE 5 magazine.Two of the NT NEWS's best journalists, Walkley

Book Reviews - Crocs in the Cabinet by Ben Smee

» Have you read this book? We'd like to know what you think about it - write a review about Crocs in the Cabinet book by Ben Smee and you'll earn 50c in Boomerang Bucks loyalty dollars (you must be a Boomerang Books Account Holder - it's free to sign up and there are great benefits!)

Ben Smee and Christopher A. Walsh are two of the Northern Territory's best journalists. Both based at the NT NEWS, Smee and Walsh have teamed up to share with readers the scandals, dramas and back-room machinations that saw the Country Liberal Party (CLP) effectively wiped out at the 2016 Territory election.