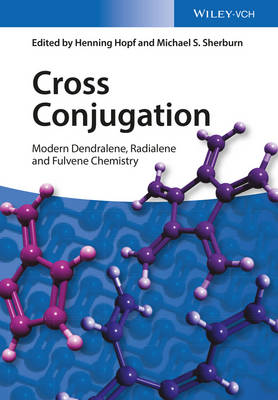 Filling a gap in the chemical literature, this monograph provides a comprehensive overview of the fascinating and expanding field of cross-conjugated molecules, their chemistry, synthesis and properties.

The editors are world leading scientists in the field, and have assembled a team of experts to discuss different classes of cross-conjuagted molecules, as well as the use of cross-conjugation for organic synthesis and applications in electronic systems and material science.

» Have you read this book? We'd like to know what you think about it - write a review about Cross Conjugation - Modern Dendralene, Radialene and Fulvene Chemistry book by Henning Hopf and you'll earn 50c in Boomerang Bucks loyalty dollars (you must be a Boomerang Books Account Holder - it's free to sign up and there are great benefits!)

Born in 1940, Henning Hopf was Director of the Institute for Organic Chemistry at the TU Braunschweig. After studying chemistry in Gottingen and at the University of Wisconsin in Madison, where he gained his doctorate 1967, he qualified as a professor in 1972 at the University of Karlsruhe. Three years later he was offered a position at the University of Wurzburg and from there followed an offer of a professorship at Braunschweig in 1979 from which he retired in 2006. His main areas of research concern hydrocarbon chemistry (alkynes, allenes, cumulenes, aromatic compounds, cyclophanes, polyolefines, etc.) and mechanistic investigations of high-temperature reactions. For his scientific oeuvre he is received many national and international awards. He served as the President of the German Chemical Society (GDCh) whose Honorary Member he is. Born in 1966, Michael Sherburn is Professor of Chemistry at the Research School of Chemistry at the Australian National University in Canberra, Australia. He studied chemistry first at The University of Nottingham, from where he obtained his PhD degree in 1991, then as a postdoctoral fellow at the Australian National University. He held positions at Massey University in New Zealand and The University of Sydney before returning to the Research School of Chemistry in 2002. His research interests focus on the development of efficient synthetic methods, strategies and tactics for the synthesis of natural and unnatural structures.

A Preview for this title is currently not available.
More Books By Henning Hopf
View All