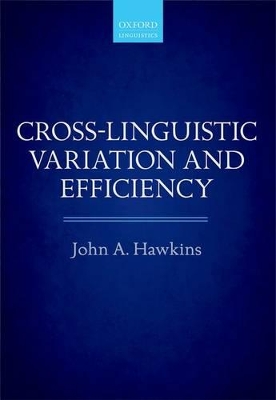 Description - Cross-Linguistic Variation and Efficiency by John A. Hawkins

In this book John A. Hawkins argues that major patterns of variation across languages are structured by general principles of efficiency in language use and communication. Evidence for these comes from languages permitting structural options from which selections are made in performance, e.g. between competing word orders and between relative clauses with a resumptive pronoun versus a gap. The preferences and patterns of performance within languages are reflected, he shows, in the fixed conventions and variation patterns across grammars, leading to a 'Performance-Grammar Correspondence Hypothesis'. Hawkins extends and updates the general theory that he laid out in Efficiency and Complexity in Grammars (OUP 2004): new areas of grammar and performance are discussed, new research findings are incorporated that test his earlier predictions, and new advances in the contributing fields of language processing, linguistic theory, historical linguistics, and typology are addressed. This efficiency approach to variation has far-reaching theoretical consequences relevant to many current issues in the language sciences. These include the notion of ease of processing and how to measure it, the role of processing in language change, the nature of language universals and their explanation, the theory of complexity, the relative strength of competing and cooperating principles, and the proper definition of fundamental grammatical notions such as 'dependency'. The book also offers a new typology of VO and OV languages and their correlating properties seen from this perspective, and a new typology of the noun phrase and of argument structure.

Other Editions - Cross-Linguistic Variation and Efficiency by John A. Hawkins Book Reviews - Cross-Linguistic Variation and Efficiency by John A. Hawkins

» Have you read this book? We'd like to know what you think about it - write a review about Cross-Linguistic Variation and Efficiency book by John A. Hawkins and you'll earn 50c in Boomerang Bucks loyalty dollars (you must be a Boomerang Books Account Holder - it's free to sign up and there are great benefits!)

John A. Hawkins is a professor of Linguistics at the University of California, Davis, and the Emeritus Professor of English and Applied Linguistics at the University of Cambridge. He has also held previous positions at the University of Southern California and the Max Planck Institute for Psycholinguistics, and visiting appointments at institutions including UCLA, UC Berkeley, the Free University of Berlin and the Max Planck Institute for Evolutionary Anthropology. He has published many books and articles on typology and universals, syntax and grammatical theory, psycholinguistics, and historical linguistics, including A Performance Theory of Order and Constituency(CUP 1994), Efficiency and Complexity in Grammars (OUP 2004) and, co-authored with Luna Filipovic, Criterial Features in L2 English: Specifying the Reference Levels of the Common European Framework (CUP 2012).