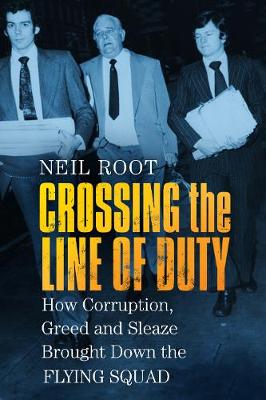 Crossing the Line of Duty: How Corruption, Greed and Sleaze Brought Down the Flying Squad

Description - Crossing the Line of Duty: How Corruption, Greed and Sleaze Brought Down the Flying Squad by Neil Root

Downfall explores, for the first time, how the Sweeney (the Flying Squad), the Elite Serious Organised Crime Unit and the Obscene Publications Squad (the Dirty Squad) descended to unprecedented levels of corruption in the 1960s and 1970s, leading the infamous gangster Charlie Richardson to say that 'the most lucrative, powerful and extensive protection racket ever to exist was administered by the Metropolitan Police'. Sir Robert Mark, who became commissioner of the Metropolitan Police and cleaned it up, said that it was 'the most routinely corrupt organisation in London'. During his time as commissioner, 50 officers were prosecuted, while 478 took early retirement. Using Metropolitan Police files obtained under Freedom of Information, which have not been accessed since the 1970s, author Neil Root can finally tell the story of how both the Flying Squad and Obscene Publications Squad of the Metropolitan Police became systemically corrupt in the post-war years, and how they reached a nadir in the mid-1970s. It also shows how this culture of corruption has been a blueprint for Met Police corruption today, and how the enormous near-autonomous power wielded by elite squads allowed the corruption to fester and grow. AUTHOR: Neil Root is a true crime historian and the author of The Murder Gang (THP, 2018) Gone (Mainstream, 2016), and Frenzy! (Preface, 2012).

Buy Crossing the Line of Duty: How Corruption, Greed and Sleaze Brought Down the Flying Squad by Neil Root from Australia's Online Independent Bookstore, Boomerang Books.

Book Reviews - Crossing the Line of Duty: How Corruption, Greed and Sleaze Brought Down the Flying Squad by Neil Root

» Have you read this book? We'd like to know what you think about it - write a review about Crossing the Line of Duty: How Corruption, Greed and Sleaze Brought Down the Flying Squad book by Neil Root and you'll earn 50c in Boomerang Bucks loyalty dollars (you must be a Boomerang Books Account Holder - it's free to sign up and there are great benefits!)


A Preview for this title is currently not available.
More Books By Neil Root
View All