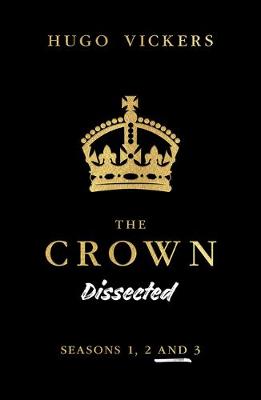 "The most knowledgeable royal biographer on the planet" -The Financial Times Hugo Vickers is an acknowledged authority on the British Royal Family. He has commented on royal matters on television and radio since 1973 and worked as historical adviser on a number of films. He is the author of books on the Queen Mother, the Duchess of Windsor, Princess Andrew of Greece (Prince Philip's mother) and Queen Mary all of whom are featured in the popular Netflix show, The Crown. Since November 2016, Peter Morgan has presented millions of viewers with the first 3 seasons of The Crown, positioned as an accurate, dramatised portrayal of the life and reign of Queen Elizabeth II. Now, in THE CROWN DISSECTED, Vickers separates fact from fiction in all 3 seasons of the series. Episode-by-episode analysis dissects the plots, characterisation and historical detail in each storyline. Vickers tells us what really happened and what certainly did not happen. It's a must-read for fans of the show, and proves that more than a little artistic license has gone into the making of The Crown. AUTHOR: In 2018 Hugo Vickers edited The Quest for Queen Mary (Zuleika/Hodder), which was universally well reviewed. He is Chairman of the Commonwealth Walkway Trust and he was appointed an honorary Fellow of the Royal Canadian Geographical Society in 2019. He is Deputy Lieutenant of the Royal County of Berkshire and has been Captain of the Lay Stewards of St. George's Chapel, Windsor, for 50 years. He lives between London and Wiltshire, and has three grown-up children, Arthur, Alice and George.

» Have you read this book? We'd like to know what you think about it - write a review about Crown Dissected: Seasons 1, 2 and 3 book by Hugo Vickers and you'll earn 50c in Boomerang Bucks loyalty dollars (you must be a Boomerang Books Account Holder - it's free to sign up and there are great benefits!)


A Preview for this title is currently not available.
More Books By Hugo Vickers
View All