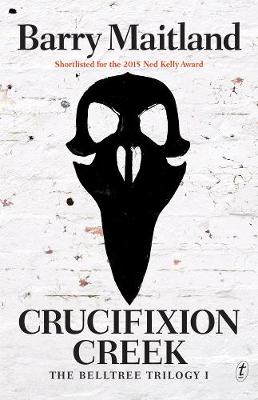 Homicide detective Harry Belltree wouldn't usually be looking too hard at an elderly couple's suicide pact. Especially now, when his brother-in-law Greg has just been stabbed to death. But it seems Greg and the old couple had ties to the same man, a bent moneylender with friends in high places-and low.

Harry can't get officially involved in Greg's murder, but he suspects a link with two other mysterious deaths- his parents'. And when he goes off-grid to investigate, that's when things start to get dangerous.

Set in Sydney, this dark, morally ambiguous and adrenaline-charged new series is a triumphant change of direction for Barry Maitland.

» Have you read this book? We'd like to know what you think about it - write a review about Crucifixion Creek book by Barry Maitland and you'll earn 50c in Boomerang Bucks loyalty dollars (you must be a Boomerang Books Account Holder - it's free to sign up and there are great benefits!)

Crucifixion Creek is the first book in The Belltree Trilogy and the fourteenth novel by Scots-born Australian author, architect and urban design expert, Barry Maitland. A former member of the Crows bikie gang shoots his girlfriend during a siege at Crucifixion Creek, in Sydney’s south-west; an elderly couple take their own lives at a beachside café; a builder is stabbed to death in an apparent mugging. Bankstown Chronicle journalist, Kelly Pool believes the incidents are connected, and she wants to trade facts with Detective Sergeant Harry Belltree.

But Harry has problems of his own: the stabbing victim was his brother-in-law and nothing about this murder makes any sense. And Harry is determined to get to the truth behind his parents’ death, three years earlier: a car “accident” that left his wife, Jennifer with a post traumatic brain injury causing blindness. While she has done much to adapt, and is an IT genius, Harry cannot let go of the idea that it was deliberate. He wants justice.

Maitland gives the reader a story that feels like it could, or possibly, has happened. A raid on a bikie compound, corrupt politicians, overseas junkets with sinister purposes, dodgy property financiers: it all sounds very familiar and quite topical. Maitland’s characters are complex and multi-faceted: while some are exactly what they first seem to be, this is certainly not the case for all of the players. Harry is appealing: a tenacious maverick who cares for those close to him but is certainly no saint.

There are twists and red herrings, plenty of tension and action delivered at a fast pace; shootings, stabbings, beatings and arson all form part of the mix, and occasionally, the reader will be left gasping at the turn of events. Of course, not all issues are resolved as this is a trilogy, but readers will be very pleased to join Harry and Jenny in book two, Ash Island. An excellent Aussie crime page-turner.

Barry Maitland was born in Scotland, studied architecture at Cambridge University and went on to work as an architect and urban design expert. In 1984 he moved to Australia to head the architecture school at the University of Newcastle in New South Wales. In 1994 The Marx Sisters, the first in his Brock and Kolla crime series, was published. Barry now writes fiction full time. He is published throughout the English-speaking world and in translation in a number of other countries, including Germany, Italy, France and Japan. He lives in the Hunter Valley.

A Preview for this title is currently not available.
More Books By Barry Maitland
View All