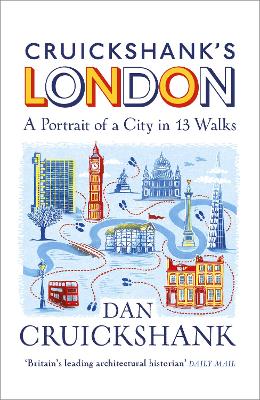 Cruickshank's London: A Portrait of a City in 20 Walks

Description - Cruickshank's London: A Portrait of a City in 20 Walks by Dan Cruickshank

'The perfect guide to the hidden history of London's streets.' BBC History Magazine
_____

London. City of ancient churches and bustling markets, palatial townhouses and modest terraces. Two millennia of expansion, commerce and street life. This is its story.

In Cruickshank's London, Britain's favourite architectural historian offers a tour through thirteen districts that made London into London. From the mysterious Anglo-Saxon roots of Hampstead Heath, via Christopher Wren's magisterial City churches, to the industrial bustle of Victorian Bermondsey, each of his walks explores a crucial site in our capital's history - and reveals how it forged the modern capital.

Jumping between East Ham in the east and Kew in the west, Dan Cruickshank explores both world-famous buildings (the Tower of London and St Pancras Station) and oft-overlooked local landmarks (Dagenham Civic Centre and Kensal Green Cemetery). His tales reveal not only the most important moments in London's history, but also the forgotten characters who witnessed them- the Huguenot weavers who transformed Spitalfields into a vibrant enclave of Georgian London, the visionary architects behind the likes of Somerset House and the Houses of Parliament, and the streetwalkers who once thronged London's great sexual highway. Along the way, he peppers the book with beautiful photographs, historical sketches and handy maps, so you can immediately follow in his footsteps.

Above all, Cruickshank calls on you to explore London. Every street in the city contains a story. This book invites you to hear them.
_____

'All power to Cruickshank and his intrepid and knowledgeable kind. We need them.' TLS

Buy Cruickshank's London: A Portrait of a City in 20 Walks by Dan Cruickshank from Australia's Online Independent Bookstore, Boomerang Books.

Book Reviews - Cruickshank's London: A Portrait of a City in 20 Walks by Dan Cruickshank

» Have you read this book? We'd like to know what you think about it - write a review about Cruickshank's London: A Portrait of a City in 20 Walks book by Dan Cruickshank and you'll earn 50c in Boomerang Bucks loyalty dollars (you must be a Boomerang Books Account Holder - it's free to sign up and there are great benefits!)

Dan Cruickshank is an architectural historian and television presenter. He is an Honorary Fellow of the Royal Institute of British Architects, a member of the Executive Committee of the Georgian Group, and on the Architectural Panel of the National Trust. His recent work includes the BBC television programmes Civilisation Under Attack (2015) and At Home with the British (2016), and the books A History of Architecture in 100 Buildings (2015) and Spitalfields (2016). He lives in London.

A Preview for this title is currently not available.
More Books By Dan Cruickshank
View All

Built in Chelsea: Three Centuries of Living Architecture and Townscape
$62.99 $69.99