Power, Pedagogy and the Popular

Much of the writing on the post-9/11 period in the United States has focused on the role of "official" Government rhetoric about 9/11. Those who have focused on the news media have suggested that they played a key role in (re)defining the nation, allowing the citizenry to come to terms with 9/11, in providing 'official' understandings and interpretations of the event, and setting the terms for a geo-political-military response (the war on terror). However, strikingly absent from post-9/11 writing has been discussion on the role of sport in this moment. This text provides the first, book-length account, of the ways in which the sport media, in conjunction with a number of interested parties -- sporting, state, corporate, philanthropic and military -- operated with a seeming collective affinity to conjure up nation, to define nation and its citizenry, and, to demonize others.
Through analysis of a variety of cultural products -- film, children's baseball, the Super Bowl, the Olympics, reality television -- the book reveals how, in the post-9/11 moment, the sporting popular operated as a powerful and highly visible pedagogic weapon in the armory of the Bush Administration, operating to define ways of being American and thus occlude other ways of being. 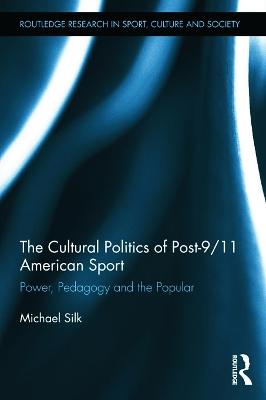 » Have you read this book? We'd like to know what you think about it - write a review about Cultural Politics of Post 9/11 American Sport book by Michael Silk and you'll earn 50c in Boomerang Bucks loyalty dollars (you must be a Boomerang Books Account Holder - it's free to sign up and there are great benefits!)

Michael Silk is a Senior Lecturer in the Faculty of Humanities and Social Science at the University of Bath and Associate Professor in Physical Cultural Studies at the University of Maryland. His research and scholarship centers on the production and consumption of space, the governance of bodies, and, the performative politics of identity within the context of neo-liberalism. He has published a number of book chapters and journal articles in Media, Culture, Society, Organisational Research Methods, American Behavioral Scientist, the Journal of Sport and Social Issues, the Sociology of Sport Journal, the International Review for the Sociology of Sport, Sport, Culture and Society, the International Journal of Media & Cultural Politics, and the Journal of Sport Management .

A Preview for this title is currently not available.
More Books By Michael Silk
View All

Standard Languages and Language Standards Greek, Past and Present
$85.49 $94.99