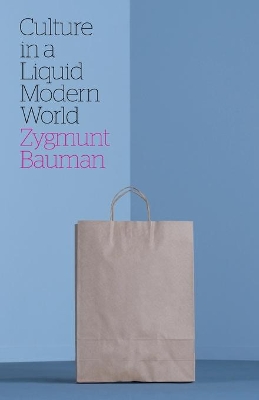 Culture in a Liquid Modern World

Description - Culture in a Liquid Modern World by Zygmunt Bauman

In its original formulation, 'culture' was intended to be an agent for change, a mission undertaken with the aim of educating 'the people' by bringing the best of human thought and creativity to them. But in our contemporary liquid-modern world, culture has lost its missionary role and has become a means of seduction: it seeks no longer to enlighten the people but to seduce them. The function of culture today is not to satisfy existing needs but to create new ones, while simultaneously ensuring that existing needs remain permanently unfulfilled. Culture today likens itself to a giant department store where the shelves are overflowing with desirable goods that are changed on a daily basis - just long enough to stimulate desires whose gratification is perpetually postponed.

In this new book, Zygmunt Bauman - one of the most brilliant and influential social thinkers of our time - retraces the peregrinations of the concept of culture and examines its fate in a world marked by the powerful new forces of globalization, migration and the intermingling of populations. He argues that Europe has a particularly important role to play in revitalizing our understanding of culture, precisely because Europe, with its great diversity of peoples, languages and histories, is the space where the Other is always one's neighbour and where each is constantly called upon to learn from everyone else.

Other Editions - Culture in a Liquid Modern World by Zygmunt Bauman » Have you read this book? We'd like to know what you think about it - write a review about Culture in a Liquid Modern World book by Zygmunt Bauman and you'll earn 50c in Boomerang Bucks loyalty dollars (you must be a Boomerang Books Account Holder - it's free to sign up and there are great benefits!)

Zygmunt Bauman (1925-2017) was Professor Emeritus of Sociology at University of Leeds.

Making the Familiar Unfamiliar: A Conversation with Peter Haffner
$32.29 $32.95