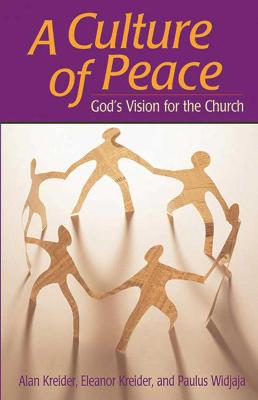 God's Vision For The Church

Why is peace such a divisive issue, even among Christians? Why is it so hard to practice right here right now? Why is peace often considered an extra, rather than an essential, to faithful Christian living? The three authors decided to write this book when the Indonesian member of the team remarked to the other two: "If the Christian church is to make any impact on Indonesia, it must address itself to the biggest peace issue -- reconciliation with Muslims." But before the writers could honestly consider that explosive possibility, they first had to ask why Christians find it so difficult to live peaceably with other Christians. They've discovered that conflict is often a prerequisite of peace. They grant that peace is a continuum -- easier to live in some areas of life than in others. They've learned that peace has two parents -- hard work and grace. Living in peace is muscular activity. The authors suggest how to develop "peacemaking reflexes"; how churches "can learn to handle conflict well"; and how to cultivate vulnerability and humility, two essential "attitudes of peacemakers." True stories from communities around the world support this hopeful but strenuous call to faithful living.

» Have you read this book? We'd like to know what you think about it - write a review about Culture of Peace book by Alan Kreider and you'll earn 50c in Boomerang Bucks loyalty dollars (you must be a Boomerang Books Account Holder - it's free to sign up and there are great benefits!)

Alan Kreider has spent his life in Christian mission and peacemaking. He was born in Indiana, grew up in Japan, and has spent most his adult life in England, where for 26 years he was a missionary with Mennonite Board of Missions. He has taught widely in Europe and North America and in recent years has frequently taught in Asia and Australia. He is especially happy when teaching together with his wife, Eleanor. Alan was educated at Goshen ( IN) College and Harvard University, where he completed his Ph.D. in English Reformation history (English Chantries: The Road to Dissolution [Harvard University Press,1979]). He is author of Journey Toward Holiness (Herald Press, 1987), an award-winning book on Christian discipleship, and has written and edited more than 10 books and numerous articles in area of mission, peacemaking, and church history. In the past 20 years he has retooled himself as a scholar of the early church, about which he loves to teach because of its relevance to Christians today. A representative product of his early church scholarship is The Change of Conversion and the Origin of Christendom (Trinity Press International, 1999). Alan is Associate Professor of Church History and Mission at Associated Mennonite Biblical Seminary, Elkhart, IN, Mission Educator for the Mennonite Mission Network, and ordained minister in the Mennonite Church. Together with Eleanor, he was for many years co-director of the London Mennonite Centre in England. In England he was active in the peace movements and taught at London Bible College and Northern Baptist College. Between 1995 and 2000 he was founding director of the Centre for the Study of Christianity and Culture, Regent's Park College, Oxford University.

A Preview for this title is currently not available.
More Books By Alan Kreider
View All