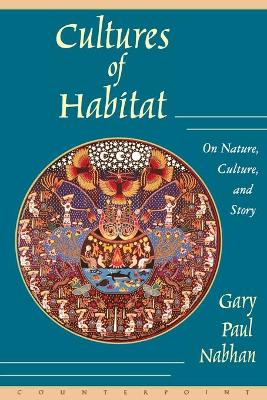 Cultures Of Habitat: On Nature, Culture, and Story

Description - Cultures Of Habitat: On Nature, Culture, and Story by Gary Paul Nabhan

Many ecologists write of nature, treating it as an object separate from people. Gary Nabhan writes in nature, finding aspects of human existence in the life of the wild. In a new collection of 26 essays, Nabhan explores the deep and complex connections between nature and people, seeking to further a more realistic understanding of the impact of various cultures on the planets biodiversity. There are many ecologists who write of nature, treating it as an object separate from the world of people. Gary Paul Nabhan writes in nature, finding elemental aspects of human existence in the life of the wild.One day while studying population maps with a colleague at the Arizona-Sonora Desert Museum, Nabhan recognized a surprising correlation between upheavals in human communities and the incidence of endangered species. Where massive in-migrations and exoduses were taking place, more plants and animals had become endangered. Locations with stable human populations sustained native wildlife more easily over the long term.This revelation prompted Nabhan to spend the next three years studying relationships among cultural diversity, community stability, and conservation of biological diversity in natural habitats. He concentrated on cultures of habitat, human communities with long histories of interacting with one particular kind of terrain and its wildlife.Here the author of The Desert Smells Like Rain has combined the eye of an ethnobiologist with chronicles from the Far Outside, that realm in which diverse natural habitats and indigenous cultures coexist. The result is a mosaic of essays that celebrates the vital connections between soul and space.

» Have you read this book? We'd like to know what you think about it - write a review about Cultures Of Habitat: On Nature, Culture, and Story book by Gary Paul Nabhan and you'll earn 50c in Boomerang Bucks loyalty dollars (you must be a Boomerang Books Account Holder - it's free to sign up and there are great benefits!)


A Preview for this title is currently not available.
More Books By Gary Paul Nabhan
View All