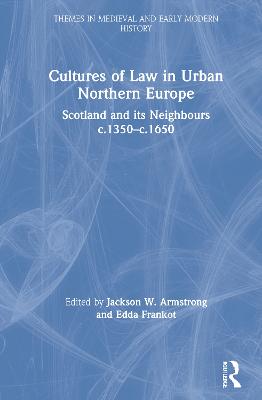 Cultures of Law in Urban Northern Europe: Scotland and its Neighbours c.1350-c.1650

Drawing together an international team of historians, lawyers and historical sociolinguists, this volume investigates urban cultures of law in Scotland, with a special focus on Aberdeen and its rich civic archive, the Low Countries, Norway, Germany and Poland from c. 1350 to c. 1650.

In these essays, the contributors seek to understand how law works in its cultural and social contexts by focusing specifically on the urban experience and, to a great extent, on urban records. The contributions are concerned with understanding late medieval and early modern legal experts as well as the users of courts and legal services, the languages and records of law, and legal activities occurring inside and outside of official legal fora. This volume considers what the expectations of people at different status levels were for the use of the law, what perceptions of justice and authority existed among different groups, and what their knowledge was of law and legal procedure. By examining how different aspects of legal culture came to be recorded in writing, the contributors reveal how that writing itself then became part of a culture of law.

Cultures of Law in Urban Northern Europe: Scotland and its Neighbours c.1350-c.1650 combines the historical study of law, towns, language and politics in a way that will be accessible and compelling for advanced level undergraduates and postgraduate to postdoctoral researchers and academics in medieval and early modern, urban, legal, political and linguistic history.

Other Editions - Cultures of Law in Urban Northern Europe: Scotland and its Neighbours c.1350-c.1650 by Jackson W. Armstrong » Have you read this book? We'd like to know what you think about it - write a review about Cultures of Law in Urban Northern Europe: Scotland and its Neighbours c.1350-c.1650 book by Jackson W. Armstrong and you'll earn 50c in Boomerang Bucks loyalty dollars (you must be a Boomerang Books Account Holder - it's free to sign up and there are great benefits!)


A Preview for this title is currently not available.
More Books By Jackson W. Armstrong
View All