'Zelda rides a broomstick!`
`Zelda's got a bat-friend!`
'Zelda smells like toadstools!`
'Witch! Witch! Witch!`
'It was bad enough when I was eleven years old. But if they sniff me out now, it'll be a disaster.

Zelda Stitch isn't much of a witch - she's hoping she'll make a better primary school teacher. But if the vice principal finds out about her, her dream will go up in a puff of smoke. Keeping her magic secret isn't the only trouble bubbling in Ms Stitch's classroom: there's wild-child Zinnia, lonely Eleanor, secretive Phoebe and a hairy, eight-legged visitor called Jeremy. Not to mention the nits...
'With NO HELP AT ALL from her disagreeable cat Barnaby, Zelda must learn to be a better teacher, a better friend and a better witch - even if that means taking broomstick lessons.
'Magic. Mischief. Mayhem. Zelda's classroom is a cauldron full of laughs. 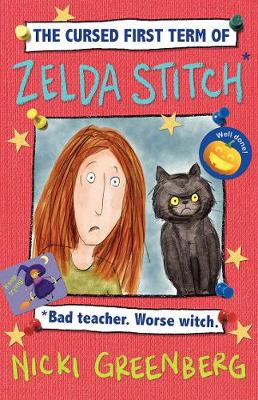 » Have you read this book? We'd like to know what you think about it - write a review about Cursed First Term of Zelda Stitch. Bad Teacher. Worse Witch book by Nicki Greenberg and you'll earn 50c in Boomerang Bucks loyalty dollars (you must be a Boomerang Books Account Holder - it's free to sign up and there are great benefits!)

Nicki Greenberg is a writer and illustrator based in Melbourne, Australia. Her first picture books, The Digits series, were published when she was fifteen years old. She later spent ten years disguised as a lawyer, while maintaining a not-so-secret Other Life as a comics artist and children's book author. Nicki is the creator of the award-winning 'staged-on-the-page' adaptation of Shakespeare's Hamlet, and of the graphic adaptation of F. Scott Fitzgerald's The Great Gatsby. Inspired by her own young children, Nicki now dedicates most of her ink to books for younger readers. Her recent titles include The Naughtiest Reindeer series, My Dog Dash, Teddy Took the Train, BOM! Went the Bear and Monkey Red, Monkey Blue.