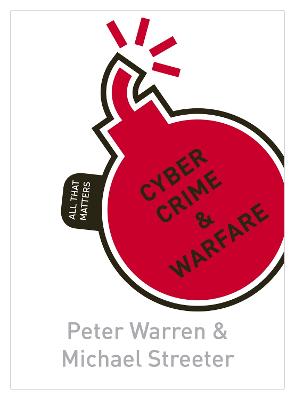 Cyber Crime & Warfare: All That Matters

Description - Cyber Crime & Warfare: All That Matters by Peter Warren

In CYBER CRIME & WARFARE, Peter Warren and Michael Streeter outline the history, scale and importance of cyber crime. In particular they show how cyber crime, cyber espionage and cyber warfare now pose a major threat to society. After analysing the origins of computer crime among early hackers the authors describe how criminal gangs and rogue states have since moved into the online arena with devastating effect at a time when the modern world - including all the communication services and utilities we have come to take for granted - has become utterly dependent on computers and the internet.

» Have you read this book? We'd like to know what you think about it - write a review about Cyber Crime & Warfare: All That Matters book by Peter Warren and you'll earn 50c in Boomerang Bucks loyalty dollars (you must be a Boomerang Books Account Holder - it's free to sign up and there are great benefits!)

Peter Warren is an award-winning newspaper and TV journalist acknowledged as an expert on technology and computer and internet crime. He wrote the first articles highlighting the potential for the internet to be abused by paedophiles in1989 and as a result was asked to brief the first UK police force to respond to the danger, the Greater Manchester Police Obscene Publications Squad, on the issues the technology has produced. He has also set up the Cyber Security Research Institute, an organisation pulling together the UK's top academic and business experts in the field of computer security with leading journalists in a bid to raise awareness of cyber crime.Michael Streeter is an author and former Fleet Street executive who worked for The Independent, the Daily Express, the Mirror and the Daily Mail. He was also editor of the Scottish Daily Express and launch editor of the Daily Express website. Michael's books include the co-authorship with Peter Warren of Cyber Alert: How the world is under attack from a new form of crime.

A Preview for this title is currently not available.
More Books By Peter Warren
View All