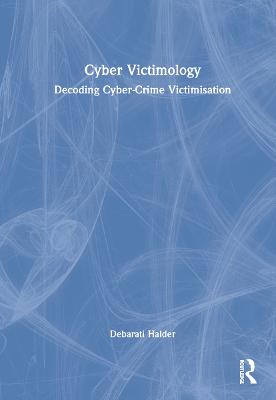 online, written in clear, non-technical terms, and presents practical solutions for the problem.

aiming to fill the gap in the existing literature on this topic. A literature review, along with case

groups of victims. As well, new policy guidelines on the basis of UN documents on cybercrimes

restitution of justice for cases of cyber-crime victimisation. This book shows how the effects of

cyber victimisation in one sector can affect others. This book also examines why perpetrators

choose to attack their victim/s in specific ways, which then have a ripple effect, creating greater

harm to other members of society in unexpected ways.

great interest to policy makers and activists working in this area. » Have you read this book? We'd like to know what you think about it - write a review about Cyber Victimology book by Debarati Halder and you'll earn 50c in Boomerang Bucks loyalty dollars (you must be a Boomerang Books Account Holder - it's free to sign up and there are great benefits!)

K. Jaishankar, PhD is a Senior Assistant Professor in the Department of Criminology and Criminal Justice, Manonmaniam Sundaranar University (MSU), Tirunelveli, Tamil Nadu, India. He has published more than 101 publications, including articles, books, book chapters and editorials. He is the recipient of the prestigious "National Academy of Sciences, India (NASI) - SCOPUS Young Scientist Award 2012 - Social Sciences". He was a Commonwealth Fellow (2009-2010) at the Centre for Criminal Justice Studies, School of Law, University of Leeds, UK and has completed a research project on Victims of Cyber Crimes. He is the founding Editor-in-Chief of the International Journal of Cyber Criminology (www.cybercrimejournal.com) and Editor-in-Chief of International Journal of Criminal Justice Sciences (www.ijcjs.co.nr) He is the founder President of South Asian Society of Criminology and Victimology (SASCV) (www.sascv.org) and founder Executive Director (Honorary) of Centre for Cyber Victim Counselling (CCVC) (www.cybervictims.org) He was a member of the UNODC (United Nations office of Drugs and Crime) Core group of Experts (15 member group) on Identity related crime (2007-08). He is a Member of the Membership and Advancement Committee, World Society of Victimology (WSV), International Advisory Board member of the Center for the Research and Development of Positive Criminology, Department of Criminology, Bar Illan University, Israel, Advisory Board Member of the Center for Cybercrime Studies, John Jay College of Criminal Justice, New York, USA and Member of the International Cybercrime Research Centre, Simon Frazer University, Vancouver, Canada, Member of the Scientific Commission of the International Society of Criminology (ISC) and Fellow of the African Center for Cyberlaw and Cybercrime prevention. He was a Discussant in the "Opening Discussion: Focusing on victims of crime - Comparing crime patterns and improving practice. Researchers' advice to policy" of the Stockholm Criminology Symposium held during June 11-13, 2012 at Stockholm, Sweden and responded to questions of Beatrice Ask, Swedish Minister for Justice, and Paula Teixeria da Cruz, the Portugese Minister for Justice. He was a Keynote Speaker at the 15th World Society of Victimology Symposium held during 5 - 9, July 2015, at Perth, Australia and 14th World Society of Victimology Symposium held during 20 - 24, May 2012, at The Hague, The Netherlands. He is recently appointed as an International Ambassador of the British Society of Criminology (BSC). His areas of Academic Competence are Victimology, Cyber Criminology, Crime mapping, GIS, Communal violence, Policing, and Crime prevention. His website is www.drjaishankar.co.nr. Debarati Halder, PhD, is an Advocate and legal scholar. She is the managing director of the Centre for Cyber Victim Counselling (CCVC) (www.cybervictims.org). She received her LLB from the University of Calcutta and her master's degree in international and constitutional law from the University of Madras. She holds a PhD degree from the National Law School of India University (NLSIU), Bangalore, India. She has coauthored a book titled 'Cyber Crime and the Victimization of Women: Laws, Rights and Regulations (IGI Global, July 2011). She has published many articles in peer-reviewed journals and chapters in peer-reviewed books. Her work has appeared in scholarly journals, including the British Journal of Criminology, Journal of Law and Religion, Victims and Offenders; Murdoch University E-Journal of Law; ERCES Online Quarterly Review; TMC Academic Journal

A Preview for this title is currently not available.
More Books By Debarati Halder
View All

Advancement of Human Rights in India: Contemporary and Emerging Challenges
$108.00 $120.00