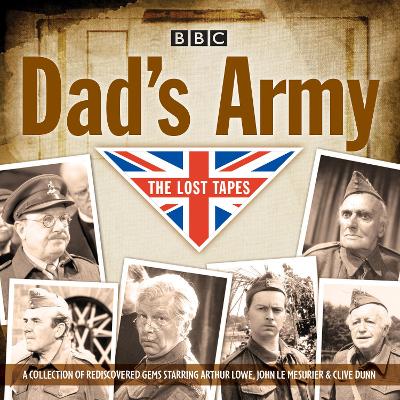 Arthur Lowe, John Le Mesurier, Clive Dunn and Ian Lavender star in a collection of rediscovered Dad's Army gems. Published for the first time, these four instalments of Dad's Army have been brought together from a variety of archive sources, and in each case represent something unique. 'A Stripe for Frazer' is the surviving TV soundtrack from an episode whose film recording has long been missing in action; 'Santa on Patrol' and 'The Cornish Floral Dance' are two mini-episodes produced in 1968 and 1970 for BBC TV's Christmas Night With the Stars; finally, 'The Boy Who Saved England' is a mini-episode written by Jimmy Perry and starring Ian Lavender, recorded as part of BBC Radio 2's Last Night at the Paris programme in 1995. With a supporting cast including Arnold Ridley, John Laurie, James Beck, Bill Pertwee and Frank Williams, this is a fine quartet of episodes you're not likely to have seen or heard before. Don't panic! Duration- 1 hour approx.

» Have you read this book? We'd like to know what you think about it - write a review about Dad's Army: The Lost Tapes book by David Croft and you'll earn 50c in Boomerang Bucks loyalty dollars (you must be a Boomerang Books Account Holder - it's free to sign up and there are great benefits!)

Jimmy Perry was born in Barnes, London in 1924. Aged 16 during the Second World War, he joined the Home Guard and then served with the Royal Artillery as a sergeant, also setting up a concert party as entertainment for the troops. After the war he trained as an actor. His writing partnership with David Croft began in 1968, and between them they created such hit shows as Dad's Army, It Ain't Half Hot Mum, Hi-de-Hi and You Rang, M'Lord? David Croft was born in Poole, Dorset. He became a Major in the Second World War, serving in India. North Africa and Singapore. After the war he worked as an actor and then turned to writing. His involvement in television led to producing and directing. His numerous producer credits include Steptoe and Son and 'Til Death Us Do Part. As well as his partnership with Jimmy Perry, he developed Are You Being Served? and 'Allo 'Allo as a co-writer and producer with Jeremy Lloyd. He was awarded the OBE in 1978. He died in 2011.

A Preview for this title is currently not available.
More Books By David Croft
View All