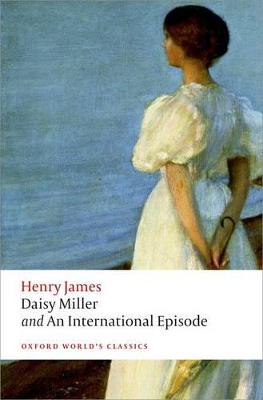 Daisy Miller and An International Episode

Description - Daisy Miller and An International Episode by Henry James

'an inscrutable combination of audacity and innocence'Young Daisy Miller perplexes, amuses, and charms her stiff but susceptible fellow-American, Frederick Winterbourne. Is she innocent or corrupt? Has he lived too long in Europe to judge her properly? Amid the romantic scenery of Lake Geneva and Rome, their lively, precarious relationship develops to a climax in the Colosseum at midnight. The tale gave James his first
popular success, yet some compatriots detected treachery in its portrayal of young American womanhood. James responded with 'An International Episode', which exposes a couple of English gentlemen to the charm and wit of
American sisters in Newport, RI and then in London. Independently read, these short masterpieces probe the manners and morals of a newly emergent transatlantic world. Together they shed light on each other, demonstrating the range of James's own manners, from sharp satire and buoyant comedy to complex, perhaps even tragic, pathos.

» Have you read this book? We'd like to know what you think about it - write a review about Daisy Miller and An International Episode book by Henry James and you'll earn 50c in Boomerang Bucks loyalty dollars (you must be a Boomerang Books Account Holder - it's free to sign up and there are great benefits!)

Adrian Poole has written extensively on Henry James and has edited What Maisie Knew, The American, Washington Square, and The Aspern Papers and Other Stories for Oxford World's Classics. He is the editor of the Cambridge Companion to English Novelists (2009), The Oxford Book of Classical (2005).