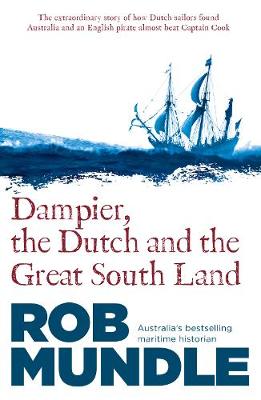 Dampier, the Dutch and the Great South Land

Description - Dampier, the Dutch and the Great South Land by Rob Mundle

The extraordinary story of how Dutch sailors found Australia and an English pirate almost beat Captain Cook Rob Mundle is back on the water with another sweeping and powerful account of Australian maritime history. It is the story of 17th-century European mariners - sailors, adventurers and explorers - who became transfixed by the idea of the existence of a Great South Land: 'Terra Australis Incognita'. Rob takes you aboard the tiny ship, Duyfken, in 1606 when Dutch navigator and explorer, Willem Janszoon, and his 20-man crew became the first Europeans to discover Australia - on the coast of the Gulf of Carpentaria. In the decades that followed, more Dutch mariners, like Hartog, Tasman, and Janszoon (for a second time), discovered and mapped the majority of the coast of what would become Australia. Yet, incredibly, the Dutch made no effort to lay claim to it, or establish any settlements. This process began with British explorer and former pirate William Dampier on the west coast in 1688, and by the time Captain Cook arrived in 1770, all that was to be done was chart the east coast and claim what the Dutch had discovered.

Book Reviews - Dampier, the Dutch and the Great South Land by Rob Mundle

» Have you read this book? We'd like to know what you think about it - write a review about Dampier, the Dutch and the Great South Land book by Rob Mundle and you'll earn 50c in Boomerang Bucks loyalty dollars (you must be a Boomerang Books Account Holder - it's free to sign up and there are great benefits!)