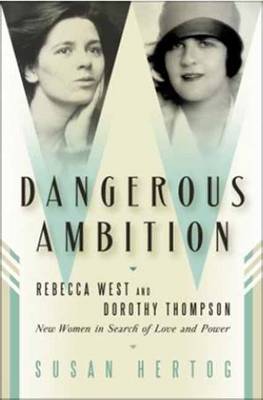 Born in the 1890s on opposite sides of the Atlantic, friends for more than forty years, Dorothy Thompson and Rebecca West lived strikingly parallel lives that placed them at the center of the social and historical upheavals of the twentieth century. In "Dangerous Ambition, " Susan Hertog chronicles the separate but intertwined journeys of these two remarkable women writers, who achieved unprecedented fame and influence at tremendous personal cost. American Dorothy Thompson was the first female head of a European news bureau, a columnist and commentator with a tremendous following whom "Time" magazine once ranked alongside Eleanor Roosevelt as the most influential woman in America. Rebecca West, an Englishwoman at home wherever genius was spoken, blazed a trail for herself as a journalist, literary critic, novelist, and historian. In a prefeminist era when speaking truth to power could get anyone--of either gender--ostracized, blacklisted, or worse, these two smart, self-made women were among the first to warn the world about the dangers posed by fascism, communism, and appeasement. But there was a price to be paid, Hertog shows, for any woman aspiring to such greatness. As much as they sought voice and power in the public forum of opinion and ideas, and the independence of mind and money that came with them, Thompson and West craved the comforts of marriage and home. Torn between convention and the opportunities of the new postwar global world, they were drawn to men who were as ambitious and hungry for love as themselves: Thompson to the brilliant, volatile, and alcoholic Nobel Prize winner Sinclair Lewis; West to her longtime lover H. G. Wells, the lusty literary eminence whose sexual and emotional demands doomed any chance they may have had at love. Tragically, both arrangements produced troubled sons, whose anger and jealousy at their mothers' iconic fame eroded their sense of personal success. Brimming with fresh insights obtained from previously sealed archives, this penetrating dual biography is a story of twinned lives caught up in the crosscurrents of world events and affairs of the heart--and of the unique trans-Atlantic friendship forged by two of the most creative and complex women of their time.

» Have you read this book? We'd like to know what you think about it - write a review about Dangerous Ambition book by Susan Hertog and you'll earn 50c in Boomerang Bucks loyalty dollars (you must be a Boomerang Books Account Holder - it's free to sign up and there are great benefits!)

Susan Hertog was born in New York City and graduated from Hunter College. After earning her M.F.A. from Columbia University, she became a freelance journalist and photographer. She is the author of one previous book, "Anne Morrow Lindbergh: Her Life." She lives in Manhattan with her family.