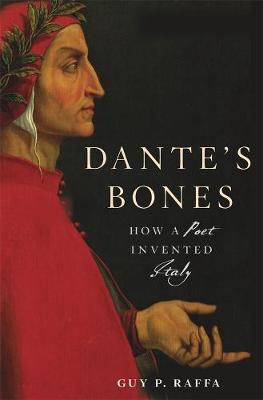 A richly detailed graveyard history of the Florentine poet whose dead body shaped Italy from the Middle Ages and the Renaissance to the Risorgimento, World War I, and Mussolini's fascist dictatorship.

Dante, whose Divine Comedy gave the world its most vividly imagined story of the afterlife, endured an extraordinary afterlife of his own. Exiled in death as in life, the Florentine poet has hardly rested in peace over the centuries. Like a saint's relics, his bones have been stolen, recovered, reburied, exhumed, examined, and, above all, worshiped. Actors in this graveyard history range from Lorenzo de' Medici, Michelangelo, and Pope Leo X to the Franciscan friar who hid the bones, the stone mason who accidentally discovered them, and the opportunistic sculptor who accomplished what princes, popes, and politicians could not: delivering to Florence a precious relic of the native son it had banished.

In Dante's Bones, Guy Raffa narrates for the first time the complete course of the poet's hereafter, from his death and burial in Ravenna in 1321 to a computer-generated reconstruction of his face in 2006. Dante's posthumous adventures are inextricably tied to major historical events in Italy and its relationship to the wider world. Dante grew in stature as the contested portion of his body diminished in size from skeleton to bones, fragments, and finally dust: During the Renaissance, a political and literary hero in Florence; in the nineteenth century, the ancestral father and prophet of Italy; a nationalist symbol under fascism and amid two world wars; and finally the global icon we know today.

» Have you read this book? We'd like to know what you think about it - write a review about Dante's Bones: How a Poet Invented Italy book by Guy P. Raffa and you'll earn 50c in Boomerang Bucks loyalty dollars (you must be a Boomerang Books Account Holder - it's free to sign up and there are great benefits!)


A Preview for this title is currently not available.
More Books By Guy P. Raffa
View All