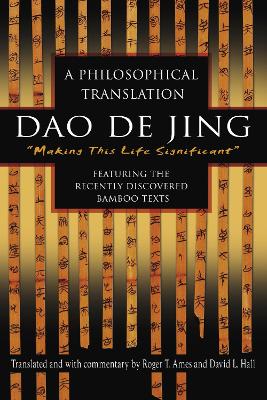 Composed more than 2,000 years ago during a turbulent period of Chinese history, the Dao de jing set forth an alternative vision of reality in a world torn apart by violence and betrayal. Daoism, as this subtle but enduring philosophy came to be known, offers a comprehensive view of experience grounded in a full understanding of the wonders hidden in the ordinary. Now in this luminous new translation, based on the recently discovered ancient bamboo scrolls, China scholars Roger T. Ames and David L. Hall bring the timeless wisdom of the Dao de jing into our contemporary world.Though attributed to Laozi, "the Old Master," the Dao de jing is, in fact, of unknown authorship and may well have originated in an oral tradition four hundred years before the time of Christ. Eschewing philosophical dogma, the Dao de jing set forth a series of maxims that outlined a new perspective on reality and invited readers to embark on a regimen of self-cultivation. In the Daoist world view, each particular element in our experience sends out an endless series of ripples throughout the cosmos. The unstated goal of the Dao de jing is self-transformation-the attainment of personal excellence that flows from the world and back into it. Responding to the teachings of Confucius, the Dao de jing revitalizes moral behavior by recommending a spontaneity made possible by the cultivated "habits" of the individual.In this elegant volume, Ames and Hall feature the original Chinese texts of the Dao de jing and translate them into crisp, chiseled English that reads like poetry. Each of the eighty-one brief chapters is followed by clear, thought-provoking commentary exploring the layers of meaning in the text. The book's extensive introduction is a model of accessible scholarship in which Ames and Hall consider the origin of the text, place the emergence of Daoist philosophy in its historical and political context, and outline its central tenets.The Dao de jing is a work of timeless wisdom and beauty, as vital today as it was in ancient China. This new version will stand as both a compelling introduction to the complexities of Daoist thought and as the classic modern English translation.

» Have you read this book? We'd like to know what you think about it - write a review about Dao De Jing book by Roger Ames and you'll earn 50c in Boomerang Bucks loyalty dollars (you must be a Boomerang Books Account Holder - it's free to sign up and there are great benefits!)

Roger T. Ames is a professor of Chinese philosophy at the University of Hawai'i. He is also editor of the journal Philosophy East & West. He is the author of several interpretive studies of classical Confucianism, including Thinking Through Confucius (with David L. Hall). His translation of Sun-tzu: The Art of Warfare is recognized as a landmark of contemporary Chinese military and philosophical studies and his translation of The Analects of Confucius (with Henry Rosemont, Jr.) has become a popular classroom text. David L. Hall was a professor of Philosophy at the University of Texas at El Paso. His early research on A. N. Whitehead and American philosophy led him to rethink our understanding of both Daoism and classical Greek philosophy, and resulted in the publication of The Uncertain Phoenix and Eros and Irony. In addition to the interpretive studies of classical Chinese philosophy, he continued to publish in American philosophy with Richard Rorty: Prophet and Poet of the New Pragmatism. From the Hardcover edition.

A Preview for this title is currently not available.
More Books By Roger Ames
View All