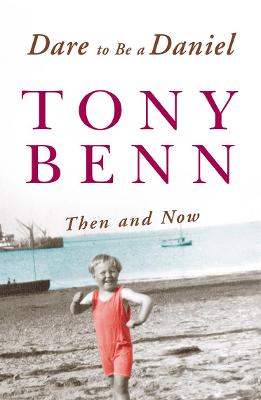 Dare To Be A Daniel

Description - Dare To Be A Daniel by Tony Benn

Born into a family with a strong, radical dissenting tradition in which enterprise and public service were combined, Tony Benn was taught to believe that the greatest sin in life was to waste time and money. Life in his Victorian-Edwardian family home in Westminster was characterised by austerity, the last vestiges of domestic service, the profound influence of his mother, a dedicated Christian and feminist, and his colourful and courageous father, elected as a Liberal MP in 1906 and later serving in Labour Cabinets under Ramsay MacDonald and Clem Atlee. Benn followed in his father's footsteps, becoming one of the most famous and respected figures in modern British politics.Dare to be a Daniel feelingly recalls Tony Benn's years as one of three brothers experiencing life in the nursery, the agonies of adolescence and of school, where boys were taught to 'keep their minds clean' and the shadow of fascism and the Second World War with its disruption and family loss. This moving memoir also describes his emergence from World War Two as a keen socialist about to embark upon marriage and an unknown political future. The book ends with some of Tony Benn's reflections on many of the most important and controversial issues of our time.

Buy Dare To Be A Daniel by Tony Benn from Australia's Online Independent Bookstore, Boomerang Books.

Book Reviews - Dare To Be A Daniel by Tony Benn

» Have you read this book? We'd like to know what you think about it - write a review about Dare To Be A Daniel book by Tony Benn and you'll earn 50c in Boomerang Bucks loyalty dollars (you must be a Boomerang Books Account Holder - it's free to sign up and there are great benefits!)

Tony Benn entered the Commons in 1950 and with Ted Heath held the record post-war timespan as an MP. He has held four cabinet posts and has twice contended the leadership of the Labour Party, of which he has also been chairman. He has written over 15 books.

A Preview for this title is currently not available.
More Books By Tony Benn
View All