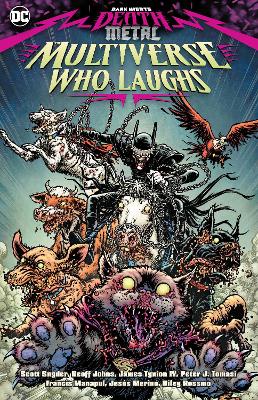 As Earth has been taken over by the Dark Multiverse, the Justice League fight to survive! This collection cranks up the volume with stories that further expand the twisted world of Dark Nights- Death Metal!

A Multiverse chock-full of your worst nightmares!

The DC Multiverse is a collection of alternate-realtiy worlds where anything is possible. Each world tells the tale of a possible split in reality, or shows how lives vary depending on a single, solitary decision. But now that the Multiverse has been destroyed, the Batman Who Laughs has used his godlike power to create a new Dark Multiverse...a collection of 52 evil worlds, each more terrifying than the last. These one-shots offer the curious-and the brave-a glimpse into the nightmare realities that the Batman Who Laughs has created in tales by creators who know what it measn to have a truly twisted sense of misfit humor. An Arkham Asylum even more terrifying than what we know? A world of evil Super Pets? Find all that and more in these new tales of the Multiverse Who Laughs!

» Have you read this book? We'd like to know what you think about it - write a review about Dark Nights: Death Metal: The Multiverse Who Laughs book by Various and you'll earn 50c in Boomerang Bucks loyalty dollars (you must be a Boomerang Books Account Holder - it's free to sign up and there are great benefits!)