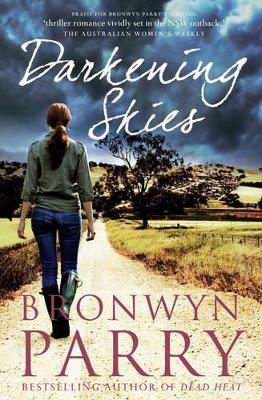 Investigative journalist Jenn Barrett never intended to return to Dungirri, the small town she escaped as a teenager. But startling revelations about local man Mark Strelitz have reopened the investigation into the accident that killed Jenn's cousin, Paula, and she is determined to find out what really happened.For eighteen years, a gap in Mark's memory has concealed the facts - that he was driving when Paula died and a corrupt police investiation sent an innocent man to prison. Mark has finally learnt enough of the truth to know he has to set the record straight.As Jenn and Mark start to ask questions, evidence is destroyed and witnesses murdered. Someone wants the past to remain buried and anyone probing into it to be stopped - permanently.Mark and Jenn's discovery will shock the whole town, but only if they live long enough to reveal it.

» Have you read this book? We'd like to know what you think about it - write a review about Darkening Skies book by Bronwyn Parry and you'll earn 50c in Boomerang Bucks loyalty dollars (you must be a Boomerang Books Account Holder - it's free to sign up and there are great benefits!)