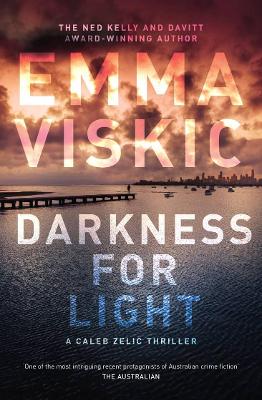 After a lifetime of bad decisions troubled PI Caleb Zelic is finally making good ones. He's in therapy, reconnecting with the Deaf community, and reconciling with his beloved wife.

But he can't escape his past.

A violent confrontation forces Caleb back into contact with his double-crossing partner, Frankie. When her niece is kidnapped, Frankie and Caleb must work together to save the child's life. But their efforts will risk everything, including their own lives.

Other Editions - Darkness for Light by Emma Viskic » Have you read this book? We'd like to know what you think about it - write a review about Darkness for Light book by Emma Viskic and you'll earn 50c in Boomerang Bucks loyalty dollars (you must be a Boomerang Books Account Holder - it's free to sign up and there are great benefits!)

5 stars Darkness For Light is the third Caleb Zelic thriller by award-winning Australian author, Emma Viskic. Caleb Zelic is in a good place: things are going well in his no-longer-on-the-brink-of-divorce relationship with Kat, who is expecting his child; a patient therapist has him more settled and intent on making good decisions; and he is finding friendship and support in the deaf community he had earlier rejected.

But then his possible new client turns up dead before they even meet, and the AFP are somehow involved. Worse still, he is blackmailed into finding his ex-partner, Frankie Reynolds, a woman who doesn’t have his best interests at heart. It feels like the opposite of a good decision.

Caleb isn’t quite sure how, but he finds himself in charge of smart, quirky nine-year-old Tilda when she is kidnapped. Tilda is the daughter of Frankie’s sister, Maggie, with whom Caleb has some unfortunate history. Now, it seems he and Frankie will have to join forces to track her down. But they aren’t the only ones searching: certain ruthless criminals will stop at nothing to protect their interests.

Meanwhile, Alberto Conti also wants Caleb’s help. He believes that someone is sabotaging his business, a café where the deaf are employed, welcomed and catered for as customers. If his business fails, it will be a great loss to the deaf community. Can Caleb spread his skills and talents to cover both these challenges?

What a unique protagonist Viskic gives the reader in Caleb Zelic. He is clearly capable and possesses an exceptional capacity for observation. While his tendency to conceal his deafness and his disinclination to ask for help made him a somewhat frustrating character in earlier books, his (still reluctant) admission of it now allows Viskic to demonstrate the attitudes from the hearing community (hearies) to which the deaf are routinely subjected.

It also makes for an utterly hilarious exchange between Caleb and some rather stoned hearies that is best not read whilst eating, drinking or with a full bladder. Quite apart from his hearing challenges, Caleb also seems to have a problem picking whom he can trust; even when he gets it right, he sometimes gets it wrong…

Caleb Zelic’s third outing features a fast-paced plot with twists and turns that will keep even the most astute the reader guessing until the final pages. Viskic manages to include vandalism, money laundering, loan sharks, computer hackers, a windscreen wiper as a weapon, quite a bit of gunplay and a fairly high body-count in the lead-up to the nail-biting climax. More of this brilliant Aussie crime fiction please, Ms Viskic! This unbiased review is from a copy provided by Echo Publishing 2 December 2019 $29.99