Darren Lehmann: Worth the Wait

One of Australian cricket's biggest names and most entertaining characters, Darren Lehmann talks candidly about his life - friends, enemies, team mates, tragedies, regrets and the incredible highs and lows of an astounding career in cricket - in this refreshingly honest and engaging autobiography. Lehmann draws the reader back to those first games of street cricket with local kids in Gawler, South Australia, to turning down an early offer to join the Australian Cricket Academy (much to the horror of some), and relives the thrill of being picked to play for Australia for the first time, only to have his hopes dashed and be named 12th man at the last minute. In one of Australian cricket's most fascinating stories, eight years would pass before Lehmann would be picked to play for his country again. And long years they were; this was the limbo period that fuelled the long-standing belief that Lehmann irked officialdom by choosing his own path instead of the one they laid out for him. Two World Cup triumphs, a notorious outburst that saw him banned amid a media frenzy, missing the opening matches of the 2003 World Cup, the tragic death of his close friend David Hookes, and countless centuries and now long-overdue recognition as one of the most powerful batsmen in this current Australian side make Darren Lehmann's story an absolutely fascinating one. He has it all: Experience. Talent. Fire. Knowledge. Trust. And plenty of dues. 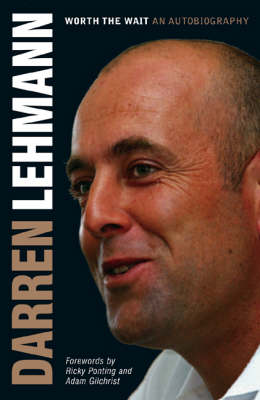 » Have you read this book? We'd like to know what you think about it - write a review about Darren Lehmann: Worth the Wait book by Darren Lehmann and you'll earn 50c in Boomerang Bucks loyalty dollars (you must be a Boomerang Books Account Holder - it's free to sign up and there are great benefits!)

Darren Lehmann was a prolific run-scorer at domestic level in Australia and England before becoming coach of the Australian cricket team. As a free-scoring left-hander, Lehmann treated spectators to an audacious mixture of aggression and deft finesse. Due to the abundance of talented batsmen in Australia in the 1990s and early 2000s Lehmann had played more first-class games and scored more runs than any other Australian (except Mike Hussey) before making his Test debut in 1998. He establishing himself in the Australia side at 33 with a maiden hundred at Port-of-Spain in his tenth Test, and then two against both Bangladesh and Sri Lanka in the next 12 months. Lehmann was more often in Australia's one-day international team and in 1999 he hit the winning runs in the World Cup final and he was also a key member of the side that defended the title four years later.

A Preview for this title is currently not available.
More Books By Darren Lehmann
View All