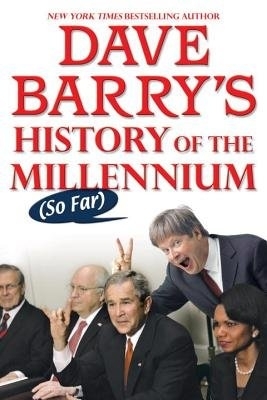 Dave Barry's History of the Millennium (So Far)

A brilliantly funny look at the tumultuous recent past from the Pulitzer Prize-winning humorist.

Remember when everything was going to go to hell when Y2K struck?

But what did happen? To provide a little perspective on a really messed-up millennium (so far), the one and only Dave Barry slips into his historian's robe (it's plush terrycloth) and revisits the defining moments in our country's recent history, from the Bush years to-jeez, it's still the Bush years! As an added bonus, Barry quickly "we're busy here" tosses in the complete history of the last millennium, covering crucial turning points such as the invention of the pizza by Leonardo da Vinci and the computer by Charles Babbage (who died in 1871 still waiting to talk to tech support).

Fellow Americans, the time has come to bone up with Barry as he puts the hysterical in history.

» Have you read this book? We'd like to know what you think about it - write a review about Dave Barry's History of the Millennium (So Far) book by Dave Barry and you'll earn 50c in Boomerang Bucks loyalty dollars (you must be a Boomerang Books Account Holder - it's free to sign up and there are great benefits!)

Dave Barry is a humor columnist. For 25 years he was a syndicated columnist whose work appeared in more than 500 newspapers in the United States and abroad. In 1988 he won the Pulitzer Prize for Commentary. Many people are still trying to figure out how this happened.Dave has also written a total of 25 books, although virtually none of them contain useful information. Two of his books were used as the basis for the CBS TV sitcom "Dave's World," in which Harry Anderson played a much taller version of Dave. Dave plays lead guitar in a literary rock band called the Rock Bottom Remainders, whose other members include Stephen King, Amy Tan, Ridley Pearson and Mitch Albom. They are not musically skilled, but they are extremely loud. Dave has also made many TV appearances, including one on the David Letterman show where he proved that it is possible to set fire to a pair of men's underpants with a Barbie doll. In his spare time, Dave is a candidate for president of the United States. If elected, his highest priority will be to seek the death penalty for whoever is responsible for making Americans install low-flow toilets. Dave lives in Miami, Florida, with his wife, Michelle, a sportswriter. He has a son, Rob, and a daughter, Sophie, neither of whom thinks he's funny.

A Preview for this title is currently not available.
More Books By Dave Barry
View All