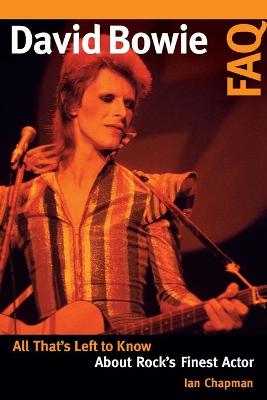 David Bowie was one of the world's most famous rock stars. But, as David Bowie FAQ shows, he was also far more than that. After spending the latter part of the 1960s searching for the best medium through which to express his artistic aspirations-and trying out several performing arts in the process-he experienced fleeting but significant success in music with the top-ten UK hit "Space Oddity," released at the time of the successful Apollo 11 moon landing in 1969.

Subsequently he achieved true international fame in the early 1970s through playing the role of the androgynous alien rock-star Ziggy Stardust. From here he went on to a career that spanned five decades, exploring numerous artistic disciplines, challenging societal mores and conventions, and building a platform of constant change and reinvention. Whereas most rock stars would find a winning formula and rigidly stick to it to avoid alienating their fans, David Bowie made stylistic variation his cornerstone-an entirely new and model for rock stardom.

But David Bowie was more than a rock star. Reflecting an approach to art that knew no boundaries, he also made his mark in movie acting, legitimate stage acting, and more. There was a unifying factor in all of the roles he played, regardless of medium, because even from childhood he'd felt himself to be an outsider, alienated and estranged. Bowie's fans quickly recognized this quality in him, and it created a bond that went far beyond the usual star-fan relationship. Through David Bowie, fans found themselves able to accept their sense of difference as a positive thing rather than a negative one. David Bowie didn't simply entertain people-he empowered them.

» Have you read this book? We'd like to know what you think about it - write a review about David Bowie FAQ: All That's Left to Know About Rock's Finest Actor book by Ian Chapman and you'll earn 50c in Boomerang Bucks loyalty dollars (you must be a Boomerang Books Account Holder - it's free to sign up and there are great benefits!)


A Preview for this title is currently not available.
More Books By Ian Chapman
View All