Man of the Age

From Victorias goldrush of the 1850s to Melbournes boom of the 1880s and bust-to-recovery of the 1890s, newspapers dominated the Australian publishing scene. Uniquely they provided local, intercolonial and international news, magazine content from the popular to the intellectual, and the latest literature, especially novels in serial instalments. By the 1870s the Melbourne Age dominated the journalistic stage. In the 1880s its circulation was far in excess of any other daily throughout all British colonial possessions and its proprietor, the driven, talented immigrant Scotsman David Syme, was acknowledged as the leader of the Australian press. For the influence that he and his newspapers exercised, he became a legend in his lifetime and for several generations after his death in 1908. Making use of family and business records and the massive nineteenth-century newspaper archive now becoming accessible through digitisation and searching via Trove, this biography of a powerful man of many parts seeks to go behind the legend and round out the story of his life primarily as press baron but also as theorist and author, financier, farmer, property developer and, not least, family man. 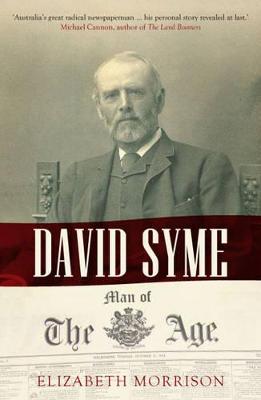 » Have you read this book? We'd like to know what you think about it - write a review about David Syme book by Elizabeth Morrison and you'll earn 50c in Boomerang Bucks loyalty dollars (you must be a Boomerang Books Account Holder - it's free to sign up and there are great benefits!)

Elizabeth Morrison is a historian of nineteenth-century Australian print culture. The political role of the newspaper press is a major theme of her Engines of Influence (2005), a study of Victorias country newspapers in the colonial period. She has researched and written extensively about the cultural role of the nineteenth-century Australian press as publisher of new fiction through newspaper serialisation. Locating significant original novels by noted author Ada Cambridge serialised in the Melbourne Age during 1888 and 1889, she edited them for re-publication in the Colonial Texts Series (A Womans Friendship, 1988 and A Black Sheep, 2004). She has a history PhD from Monash University, where she was a lecturer in librarianship and a research fellow in Australian studies. She now lives in Canberra.

Adventures of Gillion de Trazegnies - Chivalry and Romance in the Medieval East
$74.66 $82.95