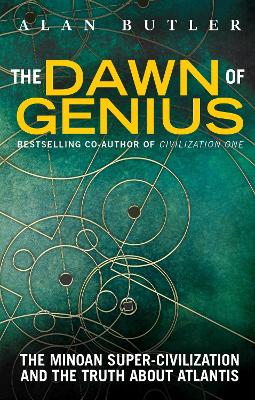 The Dawn of Genius

The Minoan Super-Civilization and the Truth About Atlantis

Description - The Dawn of Genius by Alan Butler

The Dawn of Geniusputs back into the place the missing pieces of the puzzle that is Europe prior to a massive watershed in population and culture that took place after 2,000 BC. A cataclysmic volcanic eruption in the Eastern Mediterranean destroyed an almost totally forgotten infrastructure that encompassed an entire continent, and opened Europe to an unparalleled invasion of much less sophisticated people from the East. The book recreates the culture and religion and scientific knowledge that was shattered in an instant and which plunged the world into a dark age from which it has taken over 3,000 years to emerge.
This is probably the most comprehensive explanation of mysteries from a truly ancient world that has ever been written. Those interested in exploring the genuine origins of the modern world are certain to be enthralled.

Book Reviews - The Dawn of Genius by Alan Butler

» Have you read this book? We'd like to know what you think about it - write a review about Dawn of Genius book by Alan Butler and you'll earn 50c in Boomerang Bucks loyalty dollars (you must be a Boomerang Books Account Holder - it's free to sign up and there are great benefits!)

Alan Butler has spent 30 years immersed in world history, writing books delving into neglected recesses of the past, including ancient cosmology. Three of his books written with co-author Christopher Knight have attained cult status: Civilization One (2004), Before the Pyramids (2009) and The Hiram Key Revisited (2010), all published by Watkins. His most recent title was Rosslyn Chapel Decoded (with John Ritchie; published by Watkins, 2013).