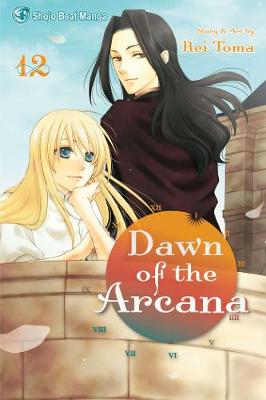 Description - Dawn of the Arcana, Vol. 12 by Rei Toma

Princess Nakaba of Senan is forced to marry Prince Caesar of the enemy country Belquat, tantamount to becoming a hostage. While Caesar is pleasing to the eye, he is also selfish and possessive, telling Nakaba outright: "You are my property." With only her attendant Loki at her side, Nakaba must find a way to cope with her hostile surroundings, her fake marriage...and a mysterious power!

Princess Nakaba of Senan and Prince Caesar of Belquat only married each other for the sake of peace between their two warring countries, yet the two develop feelings for each other while political forces threaten to tear their world apart. With Caesar's departure to Belquat, the couple separates. Meanwhile, Nakaba manages to take control of Senan as ruler! But once Caesar's father, King Guran, decides to break the peace treaty and invade Senan, what will Caesar do when he's caught between his father and the woman he loves?

Book Reviews - Dawn of the Arcana, Vol. 12 by Rei Toma

» Have you read this book? We'd like to know what you think about it - write a review about Dawn of the Arcana, Vol. 12 book by Rei Toma and you'll earn 50c in Boomerang Bucks loyalty dollars (you must be a Boomerang Books Account Holder - it's free to sign up and there are great benefits!)

Rei Toma has been drawing since childhood, but she only began drawing manga because of her graduation project in design school. When she drew a short-story manga, Help Me, Dentist, for the first time, it attracted a publisher's attention and she made her debut right away. Her magnificent art style became popular, and after she debuted as a manga artist, she became known as an illustrator for novels and video game character designs. Her current manga series, Dawn of the Arcana, is her first long-running manga series, and it has been a hit in Japan, selling over a million copies.