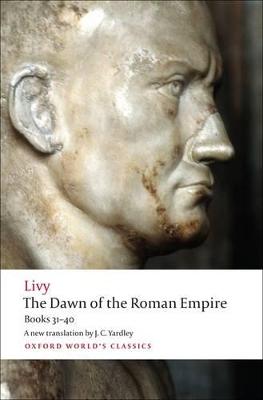 The Dawn of the Roman Empire

Description - The Dawn of the Roman Empire by Livy

'With a single announcement from a herald, all the cities of Greece and Asia had been set free; only an intrepid soul could formulate such an ambitious project, only phenomenal valour and fortune bring it to fruition. (Livy, 33. 33) Thus Livy describes the reaction to the Roman commander T.Q. Flamininus' proclamation of the freedom of Greece at the Isthmian games near Corinth in 196 BC. Half a century later Greece was annexed as a province of the Romans who burned the ancient city of Corinth to the ground. Books 31 to 40 of Livy's history chart Rome's emergence as an imperial nation and the Romans tempestuous involvement with Greece, Macedonia and the near East in the opening decades of the second century BC; they are our most important source for Graeco-Roman relations in that century. Livy's dramatic narrative includes the Roman campaigns in Spain and against the Gallic tribes of Northern Italy; the flight of Hannibal from Carthage and his death in the East; the debate on the Oppian law; and the Bacchanalian Episode. This is the only unabridged English translation of Books 31 to 40.

Buy The Dawn of the Roman Empire by Livy from Australia's Online Independent Bookstore, Boomerang Books.

Book Reviews - The Dawn of the Roman Empire by Livy

» Have you read this book? We'd like to know what you think about it - write a review about Dawn of the Roman Empire book by Livy and you'll earn 50c in Boomerang Bucks loyalty dollars (you must be a Boomerang Books Account Holder - it's free to sign up and there are great benefits!)


A Preview for this title is currently not available.
More Books By Livy
View All