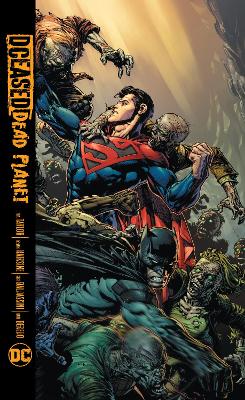 Five years after the end of the world...anti-life goes on in this sequel to the smash-hit series DCeased.

Five years have passed since Earth was evacuated following the deadly outbreak of the Anti-Life Equation.

The survivors have found a home on Earth 2, but it's a tenuous existence until the new Justice League receives a faint distress call from Earth. Can life possibly still exist on this dead planet? The new League, led by Damian Wayne, Jon Kent, and Cassie Sandsmark-the new Batman, Superman, and Wonder Woman-must return home but who-or what-is lying in wait for these fearless heroes?

» Have you read this book? We'd like to know what you think about it - write a review about DCeased: Dead Planet book by Tom Taylor and you'll earn 50c in Boomerang Bucks loyalty dollars (you must be a Boomerang Books Account Holder - it's free to sign up and there are great benefits!)


A Preview for this title is currently not available.
More Books By Tom Taylor
View All