The Dead I Know

Description - The Dead I Know by Scot Gardner

You wake in the middle of the night, your arms and feet pinned by strong hands. As you thrash your way to consciousness, a calm voice says, 'Steady. We're here to help.' Your mind registers a paramedic, a policeman, an ambulance. You are lying on the lookout at Keeper's Point, the lookout Amanda Creen supposedly threw herself off. And you have absolutely no idea how you got there.

Aaron Rowe walks in his sleep. He has dreams he can't explain, and memories he can't recover. Death doesn't scare him - his new job with a funeral director may even be his salvation. But if he doesn't discover the truth about his hidden past soon, he may fall asleep one night and never wake up.

'I have never read a book more gripping, nor a book more triumphantly alive. I love how it haunts me still. I swear, I will never forget The Dead I Know'. - John Marsden

Other Editions - The Dead I Know by Scot Gardner 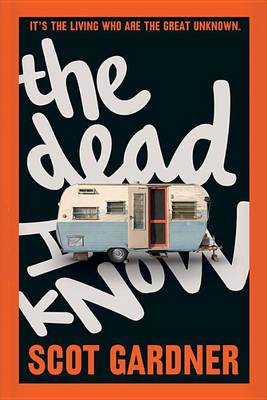 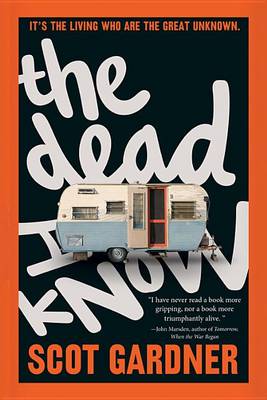 Book Reviews - The Dead I Know by Scot Gardner

» Have you read this book? We'd like to know what you think about it - write a review about Dead I Know book by Scot Gardner and you'll earn 50c in Boomerang Bucks loyalty dollars (you must be a Boomerang Books Account Holder - it's free to sign up and there are great benefits!)

I had no idea what to think of The Dead I Know before -- or even as -- I started. All I knew is that it was a recent Aussie release, and that was good enough for me. Though, by the end, I was pleasantly surprised.

There's a lot of mystery shrouding Aaron in the beginning. He's stoic, and initially doesn't give much away through either his dialogue or first-person narration. We understand him better once we get a look at his home life, and sympathise with him more. While it's heart-wrenching to see his life begin to fall apart, it's also inspiring to watch how he grows and develops from this.

The writing style was simple and engaging. It easily evoked Aaron's voice and helped the reader to become invested in his well-being.

The background characters -- namely the Barton family -- were realistically developed and fleshed out. John's almost fatherly role in Aaron's life created a hopeful dynamic, and Skye's relationship with him was in equal parts adorable and touching (Something about her character was really likeable... it was probably her name). Aaron began to feel like a part of their family; a second family contrasting the state of his real one.

The mysterious element to the story -- what Aaron's sleepwalking, almost- crazy mother, and strange recurring dreams all meant -- was well done, with suspense building until the mystery is finally unravelled. It isn't hard to piece it together yourself first, but it's worth sticking around to see Aaron's emotional reaction to it and how he bounces back.

Overall, an short and enjoyable read that I'd recommend to fans of darker YA.

Aaron Rowe has just started his first day at his new job as a funeral director. He is grateful for the job in more ways then one, primarily because it gets him out of going to school but the bonus is he'll get payed. There are some obvious draw backs to the position, though it is not the dead bodies as one would expect, it is the living that are left behind and their grief that has stirred something in Aaron.

It has been years since Aaron has had trouble sleeping, but now the nightmares have returned. But just as bad as the dreams is the sleepwalking. So now it's not only the dark disturbing images that fill his sleeping mind that frighten him, it's the fear that he could wake anywhere, at the beach, outside a cafe, at the lookout. But scarier is the possibilities of what Aaron has done in his sleeping state.

the dead I know is about a tough yet vulnerable boy who is struggling with his hidden past and his current circumstances. Although a book about death the meaning behind its pages is life. A story that speaks to all those who have been left behind to pick up the pieces in the wake of a death of a loved one. Aaron's tale is an urban mystery that is shaded in tragedy, death, dreams and crustless sandwiches.

Scot wasn't born reading and writing; in fact he left school in year eleven to undertake an apprenticeship in gardening with the local council. He has worked as a waiter, masseur, delivery truck driver, home dad, counsellor and musician. Scot's first fiction for young readers, One Dead Seagull, was published after he attended a writing camp and writing conferences with John Marsden. His many books since include Burning Eddy, shortlisted for a CBCA award and for the NSW Premier's Literary Award, and Gravity, shortlisted for the Victorian Premier's Literary Award. Scot lives with his wife and one of three children (the others are grown-ups), a poodle and some chooks in the bush in Eastern Victoria. He divides his time between writing and teaching tech and welfare at a secondary college in Gippsland.