Death Drive: There are No Accidents

Description - Death Drive: There are No Accidents by Stephen Bayley

Cars have a talismanic quality. No other manufactured object has the same disturbing allure. More emotions are involved in cars than any other product: vanity, cupidity, greed, social competitiveness, cultural modelling. But when all this perverse promise ends in catastrophe, these same talismanic qualities acquire an extra dimension. The car crash is a defining phenomenon of popular culture. Death Drive is both an appreciative essay about the historic place of the automobile in the modern imagination and an exploration of the circumstances surrounding multiple celebrity denouements, including Isadora Duncan, Jane Mansfield, James Dean, Jackson Pollack, Princess Grace, and Helmut Newton, among many others. En route the narrative traces one very big arc - the role of the car in extending or creating the personality of a celebrity - and concludes by confronting the imminent death of the car itself. AUTHOR: Stephen Bayley recounts delightfully grotesque tales about celebrities done in by trees, by lampposts, or by nonentities in ancient Chevys. A design masterpiece, this book combines exquisite prose with stylish presentation - the cars are described more lovingly than the people who perished in them. Like a Bugatti, Death Drive recalls a time when books and cars were beautiful. SELLING POINTS: . Albert Camus once remarked that there's "nothing more absurd than to die in a car accident". That was before his car hit a tree at 80mph. Death Drive - a compendium of stories about famous people killed stupidly in cars - oozes absurdity . A Times Book of the Year, 2016 . Big names like James Dean, Jackson Pollack, and Princess Grace are among the victims 72 colour photographs

Other Editions - Death Drive: There are No Accidents by Stephen Bayley 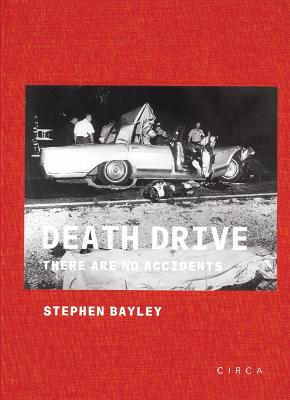 Book Reviews - Death Drive: There are No Accidents by Stephen Bayley

» Have you read this book? We'd like to know what you think about it - write a review about Death Drive: There are No Accidents book by Stephen Bayley and you'll earn 50c in Boomerang Bucks loyalty dollars (you must be a Boomerang Books Account Holder - it's free to sign up and there are great benefits!)

Stephen Bayley is an author, critic, columnist, consultant, broadcaster, curator and founding director of the influential Design Museum. Over the past thirty years his writing has changed the way the world thinks about design.

A Preview for this title is currently not available.
More Books By Stephen Bayley
View All