When a mysterious invitation arrives for Miss Phryne Fisher from an unknown Captain Herbert Spencer, Phryne's curiosity is excited. Spencer runs a retreat in Victoria's spa country for shell-shocked soldiers of the First World War. It's a cause after Phryne's own heart but what could Spencer want from her?

Phryne and the faithful Dot view their spa sojourn as a short holiday but are quickly thrown in the midst of disturbing Highland gatherings, disappearing women, murder and the mystery of the Temperance Hotel.

Meanwhile, Cec, Bert and Tinker find a young woman floating face down in the harbour, dead. Tinker, with Jane and Ruth, Phryne's resilient adopted daughters, together decide to solve what appears to be a heinous crime.

Disappearances, murder, bombs, booby-traps and strange goings-on land Miss Phryne Fisher right in the middle of her most exciting adventure.

Other Editions - Death in Daylesford by Kerry Greenwood 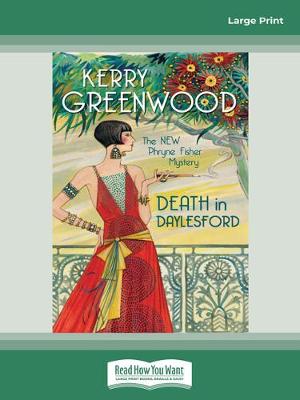 » Have you read this book? We'd like to know what you think about it - write a review about Death in Daylesford book by Kerry Greenwood and you'll earn 50c in Boomerang Bucks loyalty dollars (you must be a Boomerang Books Account Holder - it's free to sign up and there are great benefits!)

This 21st instalment in Kerry Greenwood's Phryne Fisher series is as fabulous as ever! The Hon. Phryne Fisher, accompanied by the ever-faithful Dot, accepts an invitation to visit the dashing but mysterious Captain Herbert Spencer in Hepburn Spa, near Daylesford. A local young man is killed in an apparent accident at the Daylesford Highland Gathering, as Phryne and Dot look on. Days later, they're also present when a second man collapses and dies at a dance in a church hall. Phryne suspects murder, and notes that both young men were suitors of Annie Tremain, the stunningly beautiful but innocent barmaid at the Temperance Hotel. Also piquing Phryne's detective interest is the fact that several local married women have disappeared from their homes in the Daylesford area over recent months - have they met with foul play, or is there an alternative explanation? Meanwhile, back in Melbourne, Phryne's household have a mystery of their own to solve. Tinker, while catching up with Cec and Bert at the docks, has come across the floating body of a young woman. She's identified as Claire Knight, a missing schoolfriend of Ruth and Jane's. Detective Sergeant Hugh Collins, who's staying at Phryne's St. Kilda home to keep an eye on Tinker and the girls, puts all three unofficially to work in determining what happened to Claire. This was a highly entertaining read, with several intertwining mystery plotlines and plenty of historical and artistic detail, particularly as regards Phryne's sartorial choices. Several of Kerry Greenwood's creative similes had me laughing out loud. The central characters are all in sterling form, with the exception of Jack Robinson, who makes only a brief appearance in the concluding chapter. The cast of supporting characters, based both in Melbourne and in the spa region, are well developed and interesting. Greenwood explores many themes around women's rights, social and gender inequality and even competing religious denominations. She skilfully intertwines into the narrative many descriptive and historical details of one of Victoria's most visually stunning regions. Death in Daylesford is another triumph for Kerry Greenwood, and I have no hesitation in thoroughly recommending it, both to existing aficionados of the series, and those who are yet to discover its delights. My thanks to the author and publisher Allen & Unwin Australia, for the opportunity to read and review an Uncorrected Proof of this title.

“This murderer specialises in killing in the middle of a crowd, and it’s a different method each time. I may add that this is a criminal of extraordinary cunning, and is moreover quite, quite mad and horribly dangerous.”

Death In Daylesford is the twenty-first book in the popular Phryne Fisher series by award-winning Australian author, Kerry Greenwood. While Phryne and Dot travel to Daylesford at the invitation of (former) Captain Herbert Spencer to visit his Hepburn Springs hotel, Detective Sergeant Hugh Collins is left assisting an incompetent Acting DI in a possible murder case while DI Jack Robinson is seconded elsewhere.

Claire Knight, a classmate of Phryne’s adopted daughters, is found floating face-down at the docks, and Hugh quickly judges that he will have to do his own investigating, when Acting DI Fraser jumps to the easy conclusion and fixes on the nearest male as the culprit. Ruth, Jane and Tinker, each resourceful and talented in their own way, make significant contributions to learning the truth.

Meanwhile, Phryne is expecting to have a quiet vacation in a spa town, inspect the hotel catering to shell-shocked soldiers with a view to contributing financial support, and to relax, but everyone seems to think she’s there to investigate the recent disappearances of several farmers’ wives.

But before she can ask a single question, there’s a terrible accident at the Highland Gathering with the caber toss, and a man is dead. Except Phryne can immediately see it’s no accident, even if the local cop, the pompous Sergeant Offaly, seems clueless.

The victim is one of many would-be suitors of the breath-takingly beautiful barmaid at the Temperance Hotel. Weeks earlier, another of their number fell from a train; when a third young man dies at the church dance, Phryne wonders: could one of Annie Tremain’s admirers be trying to eliminate rivals?

Two more women go missing during their stay so, in between enjoying the region’s attractions, their days are busier than anticipated: “Dot found it hard to sleep during the day, preferring healthful early nights to obtain her necessary recuperation. Phryne had heard of early nights but considered them hideously overrated.”

Phryne, amid spa and massage, vegetarian meals with herbal wines (all surprisingly good!) and seduction, and the ever-chaste Dot gather information by careful observation, judicious listening (or opportune eavesdropping) and shrewd questioning, and manage to satisfactorily solve several mysteries, save a horse and prevent a fourth murder, while keeping certain necessary secrets.

As well as lots of clever deduction, this instalment features Mr Butler’s dumb waiter, Dot arming herself against Phryne’s driving, a valerian-loving cat, an exploding outhouse and domestic slavery. Entertaining, as always. This unbiased review is from an uncorrected proof copy provided by Allen and Unwin.