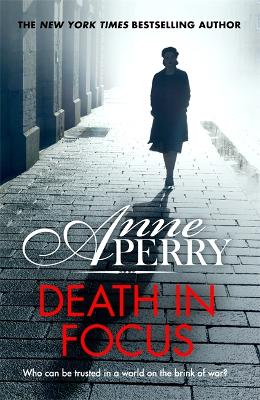 New York Times bestselling author Anne Perry brings us an exciting new thriller of espionage and murder set across Europe in the 1930s. The world is on the brink of war and no one is to be trusted as young photographer Elena Standish becomes embroiled in a terrifying game of cat and mouse...It is 1933 and Europe is a place of increasing fear and violence. Young British photographer Elena Standish is on assignment in Amalfi when she meets Ian Newton, a charming Englishman with whom she falls in love. But what does she really know about him?Accompanying him on a train across Italy to Paris, she finds him critically stabbed and dying. He tells her he is a member of Britain's Secret Service, on his way to Berlin to warn MI6 so that they can foil a plot to assassinate one of Hitler's vilest henchmen and blame Britain for it, thus causing a devastating diplomatic crisis. Elena promises to deliver the message. But she is too late, and finds herself fleeing for her life.Meanwhile Lucas Standish, secret head of MI6 during the war, learns that his beloved granddaughter is being hunted in Berlin for murder. With Elena on the run, and at least one traitor in the British Embassy, it is impossible to know who to trust...Praise for Anne Perry's previous novels:'A brilliant Victorian police procedural in which well-realized characters and settings are fascinating in themselves' Booklist'Engrossing... Perry has always excelled in courtroom scenes and arguments between barristers, and she outdoes herself in two dramatic trials'Washington Times Daily'Perry balances plot and character neatly before providing a resolution that few will anticipate'Publishers Weekly » Have you read this book? We'd like to know what you think about it - write a review about Death in Focus (Elena Standish Book 1) book by Anne Perry and you'll earn 50c in Boomerang Bucks loyalty dollars (you must be a Boomerang Books Account Holder - it's free to sign up and there are great benefits!)


A Preview for this title is currently not available.
More Books By Anne Perry
View All