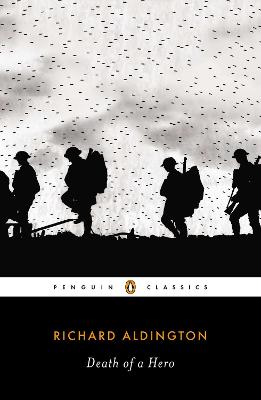 Death of a Hero

Description - Death of a Hero by Richard Aldington

Acclaimed poet Richard Aldington based his first novel on his own experiences on the Western Front during World War I. It tells the story of George Winterbourne, who enlists in the British Army and is sent to France.
One of the great World War I antiwar novels - honest, chilling, and brilliantly satirical
Based on the author's experiences on the Western Front, Richard Aldington's first novel, Death of a Hero, finally joins the ranks of Penguin Classics. Our hero is George Winterbourne, who enlists in the British Expeditionary Army during the Great War and gets sent to France. After a rash of casualties leads to his promotion through the ranks, he grows increasingly cynical about the war and disillusioned by the hypocrisies of British society. Aldington's writing about Britain's ignorance of the tribulations of its soldiers is among the most biting ever published. Death of a Hero vividly evokes the morally degrading nature of combat as it rushes toward its astounding finish.
About the author-
Richard Aldington (1892-1962) was known as a translator, critic, biographer, and poet of distinction. He joined the British Army in 1916 and was wounded in 1918.

Book Reviews - Death of a Hero by Richard Aldington

» Have you read this book? We'd like to know what you think about it - write a review about Death of a Hero book by Richard Aldington and you'll earn 50c in Boomerang Bucks loyalty dollars (you must be a Boomerang Books Account Holder - it's free to sign up and there are great benefits!)

Richard Aldington (1892-1962) was known as a translator, critic, biographer, and poet of distinction. He joined the British Army in 1916 and was wounded in 1918. James H. Meredith, a retired United States Air Force lieutenant colonel, is the introducer of the Penguin Classics editions of Paths of Glory by Humphrey Cobb and Bombs Away by John Steinbeck.

A Preview for this title is currently not available.
More Books By Richard Aldington
View All