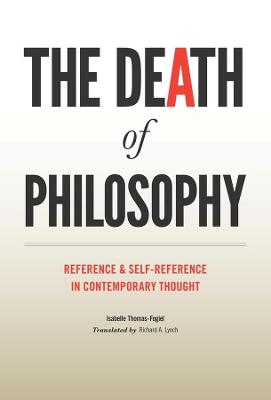 The Death of Philosophy

Reference and Self-reference in Contemporary Thought

Description - The Death of Philosophy by Isabelle Thomas-Fogiel

Philosophers debate the death of philosophy as much as they debate the death of God. Kant claimed responsibility for both philosophy's beginning and end, while Heidegger argued it concluded with Nietzsche. In the twentieth century, figures as diverse as John Austin and Richard Rorty have proclaimed philosophy's end, with some even calling for the advent of "postphilosophy." In an effort to make sense of these conflicting positions?which often say as much about the philosopher as his subject?Isabelle Thomas-Fogiel undertakes the first systematic treatment of "the end of philosophy," while also recasting the history of western thought itself.

Thomas-Fogiel begins with postphilosophical claims such as scientism, which she reveals to be self-refuting, for they subsume philosophy into the branches of the natural sciences. She discovers similar issues in Rorty's skepticism and strands of continental thought. Revisiting the work of late-nineteenth and early-twentieth-century philosophers, when the split between analytical and continental philosophy began, Thomas-Fogiel finds both traditions followed the same path?the road of reference?which ultimately led to self-contradiction. This phenomenon, whether valorized or condemned, has been understood as the death of philosophy. Tracing this pattern from Quine to Rorty, from Heidegger to Levinas and Habermas, Thomas-Fogiel reveals the self-contradiction at the core of their claims while also carving an alternative path through self-reference. Trained under the French philosopher Bernard Bourgeois, she remakes philosophy in exciting new ways for the twenty-first century.

Book Reviews - The Death of Philosophy by Isabelle Thomas-Fogiel

» Have you read this book? We'd like to know what you think about it - write a review about Death of Philosophy book by Isabelle Thomas-Fogiel and you'll earn 50c in Boomerang Bucks loyalty dollars (you must be a Boomerang Books Account Holder - it's free to sign up and there are great benefits!)

Isabelle Thomas-Fogiel is director of research in the Doctoral School of Philosophy at the Sorbonne. She specializes in the history of philosophy, the philosophy of science, and aesthetics and has published five books in French. Richard A. Lynch is instructor of philosophy at DePauw University and founder of the Foucault Circle. He has also translated works by Michel Foucault and Francois Ewald.