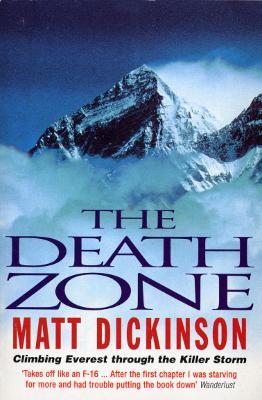 It seemed like any other season on Everest. Ten expeditions from around the world were preparing for their summit push, gathered to-gether to try for mountaineering's ultimate prize. Twenty-four hours later, eight of those climbers were dead, victims of the most devastating storm ever to hit Everest. On the North face of the mountain, a British expedition found itself in the thick of the drama. Against all odds, film-maker Matt Dickinson and professional climber Alan Hinkes managed to battle through hurricane-force winds to reach the summit. In Death Zone, Matt Dickinson describes the extraordinary event that put the disaster on the front cover of Time and Newsweek. The desperate attempts of teams on the southern side of the mountain. . . fatal errors that led to the deaths of three Indian climbers on the North Ridge. . . and the moving story of Rob Hall, the New Zealand guide who stayed with his stricken client, and paid with his life. Based on interviews with the surviving climbers and the first-hand experience of having lived through the killer storm, this book tackles issues at the very heart of mountaineering. Death Zone is an extra-ordinary story of human triumph, folly and disaster.

» Have you read this book? We'd like to know what you think about it - write a review about Death Zone book by Matt Dickinson and you'll earn 50c in Boomerang Bucks loyalty dollars (you must be a Boomerang Books Account Holder - it's free to sign up and there are great benefits!)


A Preview for this title is currently not available.
More Books By Matt Dickinson
View All

North Face: A deadly earthquake in the Himalaya. A climber trapped high on Everest. An epic rescue attempt is about to begin.
$25.28 $28.09

Killer Storm: A terror attack at Everest Base Camp. Ryan and his friends are taken hostage. The scene is set for the ultimate Everest adventure.
$16.81 $18.68