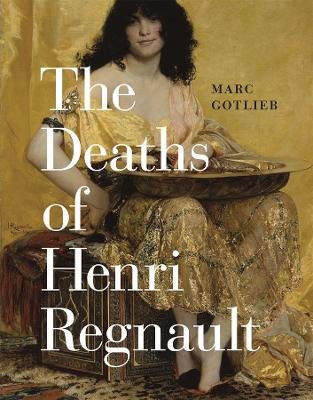 This is the first book in English on Henri Regnault (1843-71), a forgotten star of the European fin-de-siecle. A brilliant maverick who once seemed to hold the future of French painting in his hands, Regnault enjoyed a meteoric rise that was cut short when he died at the age of twenty-seven in the Franco-Prussian War. The story of his glamorous career and patriotic death colored French commemorative culture for nearly forty years-until his memory was swept away by the vast losses of World War I. In The Deaths of Henri Regnault, Marc Gotlieb reintroduces this important artist while offering a new perspective on the ultimate decline of nineteenth-century salon painting.

Gotlieb traces Regnault's trajectory after he won the prestigious Grand Prix de Rome, a fellowship that provided four years of study in Italy. Arriving in Rome, however, Regnault suffered a profound crisis of originality that led him to flee the city in favor of Spain and Morocco. But the crisis also proved productive: from Rome, Madrid, Tangier, and Paris, Regnault enthralled audiences with a bold suite of strange, seductive, and violent Orientalist paintings inspired by his exotic journey-images that, Gotlieb argues, arose precisely from the crisis that had overtaken Regnault and that in key respects was shared by his more avant-garde counterparts.

Both an in-depth look at Regnault's violent art and a vibrant essay on historical memory, The Deaths of Henri Regnault lays bare a creative legend who helped shape the collective experience of a generation.

» Have you read this book? We'd like to know what you think about it - write a review about Deaths of Henri Regnault book by Marc Gotlieb and you'll earn 50c in Boomerang Bucks loyalty dollars (you must be a Boomerang Books Account Holder - it's free to sign up and there are great benefits!)

Marc Gotlieb is the Class of 1955 Professor of Art at Williams College and director of the Williams College / Clark Art Institute graduate program in the history of art. He is the author of The Plight of Emulation: Ernest Meissonier and French Salon Painting.

A Preview for this title is currently not available.
More Books By Marc Gotlieb
View All