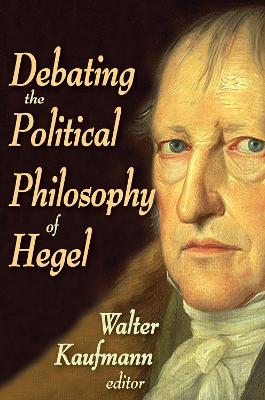 Debating the Political Philosophy of Hegel

Description - Debating the Political Philosophy of Hegel by Walter Kaufman

Few philosophers have had as much influence as Hegel. When he died in 1831, he not only dominated German philosophy, but also left his mark on the study of religion and art, on historical studies, and on political thought. Much later, Lenin insisted that no one could completely comprehend Karl Marx unless he had first made a thorough study of Hegel. Later, it became fashionable to link Hegel with Nazism and communism. There is today broad agreement that knowledge of Hegel's thought adds a critical dimension to our understanding of recent cultural and political history. This volume, first published in 1970, focuses on Hegel's political philosophy. It brings together ten essays by six authors who present sharply conflicting interpretations. Here are point-by-point discussions, from differing perspectives, on Hegel's philosophy of the state and his ideas about history and war, nationalism and liberty. Never before have these issues been joined in comparable fashion in a single volume. Sidney Hook sees Hegel as "the very model of a small - minded, timid Continental conservative" and accuses him of "the most specious reasoning that ever disgraced a philosopher," and E. F. Carritt argues for a "totalitarian" reading of Hegel, while T. M. Knox and Shlomo Avineri defend Hegel against these and other charges. The book also contains a short contribution by Z. A. Pelczynski and Walter Kaufmann's "The Hegel Myth and Its Method." Walter Kaufmann, an outstanding historian of European ideas in philosophy, furnished an introduction as well as footnotes that help to clarify perplexing issues and in some cases seek to put an end to long-lived errors. His analysis is itself a major contribution to Hegel's political theories.

» Have you read this book? We'd like to know what you think about it - write a review about Debating the Political Philosophy of Hegel book by Walter Kaufman and you'll earn 50c in Boomerang Bucks loyalty dollars (you must be a Boomerang Books Account Holder - it's free to sign up and there are great benefits!)


A Preview for this title is currently not available.
More Books By Walter Kaufman
View All